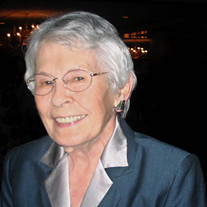 Hauer, Loretta C. Beloved mother, grandmother, great-grandmother, sister, aunt and friend, Loretta passed away on January 2, 2022 in Apple Valley, MN at age 89. She married Rudy Hauer on August 29, 1953. They raised their children, Cathy and Keith, in the communities of Waterville, Faribault and, ultimately, on a 40 acre hobby farm south of Owatonna. Loretta bore the pain of the death of her husband, Rudy, who passed away at age 54 and her son, Keith, who passed away at the too young age of 37. Known to her family as "Gram", Loretta, who was widowed at age 51, joined the household of her daughter, Cathy; including Cathy's husband, Dave, and daughters, Megan and Whitney. Gram had an apartment in the lower level of their home for the past 35 years and was an integral part of the family being the best ever grandmother to Megan and Whitney, a supportive mom and favorite gardening buddy for Cathy and someone who loved to tease Dave. Outside the family, she enjoyed road trips and adventures with several widow friends over the years. Loretta was strong in her faith and dedicated to her church, Church of the Risen Savior. She volunteered at Mission Outpost at Prince of Peace Lutheran Church for 15 years with a circle of friends she called her "second family". Gram was quick witted and loved to tease with her flashing dark eyes letting you know she was having fun with you. She is survived by daughter Cathy (Dave) Bartle; granddaughters Megan (Chris Thorn) Bartle and Whitney (Joe) Weber; great grandson, Matthew Weber; family of Keith Hauer; sisters, Jeanette Sticha, Bernadine (Bob) Bissonette, Valeria (Bob) McHale and brother, John (Jane) Skluzacek; sisters-in-law, Eleanor Skluzacek, Irene Moser, Mary Hauer; brother-in-law, Bill (Judy) Hauer; and many other relatives and friends. Preceded in death by her husband, Rudy Hauer; son, Keith Hauer; parents, John and Cecelia (Malecha) Skluzacek; in-laws, Rudy and Hannah (Weiers) Hauer; brothers, Norbert Skluzacek, Adrian Skluzacek; sister Sr. Marilyn Skluzacek, OP; and many other relatives and friends. Mass of Christian Burial is scheduled for Saturday, January 29 at 11:00am at Church of the Risen Savior, 1501 Cty Rd 42 E, Burnsville, MN with visitation one hour prior to mass. Mass will be live-streamed via YouTube. Private interment. A special thank you to Park Nicollet Methodist Hospice for the loving care and support they provided during Loretta's final days, especially Micki, Peggy and Jenna. In lieu of flowers, memorials preferred to www.sharingandcaringhands.com. Washburn-McReavy Funeral Chapels, Werness Brothers Chapel, Bloomington (952)884-8145.

The family of Loretta Cecelia Hauer created this Life Tributes page to make it easy to share your memories.