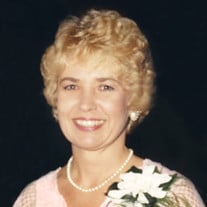 Llynda Esther (Edberg) Rhoades was born on August 14, 1946 in Minneapolis, Minnesota to E. Gideon and Lydia E. (Sodeman Nielsen) Edberg. In 1949, her father died and she, her mother, and her 5-year-old brother, Donald, moved to the farm home of her aunt and uncle, Leona and Fred Meyer, south of Walters, Minnesota. The family of three moved into a small house that was built adjacent to the Meyers' home. Llynda attended grade school in Walters and Sunday School at St. John's Lutheran Church in Walters, where she was also confirmed in 1961. In 1955, her mother married Herbert Matz and they moved to a new farm home north of Walters in 1958. Llynda graduated from Kiester High School in 1964 and Mankato State College in 1968. During her college years, Herb and Lydia added three family members through adoption: Raymond in 1964 and Nancy and Billy in 1967. Llynda was not only a treasured big sister to them but a second mom. After graduating from MSC, she moved back to Minneapolis and served as a librarian in St. Anthony Public Schools for three years. She then became an independent contractor until she established her own business, Luxureze, a manufacturer of nylon tricot sheets and pillowcases. In Llynda's sophomore year at MSC, she met freshman James Rhoades, and they married in 1975. Jim was a dedicated husband and eventually caregiver extraordinaire after Llynda suffered a stroke in 1996 and a bout of cancer in 1998. This ended her career at the US Postal Service, where she had been employed since 1979. Llynda was delightful, with a charming smile, gentle voice, and sweet disposition. Everyone loved her. She was meticulous and did everything to perfection. She was always "put together," with hair, clothing, and accessories styled beautifully. She was an accomplished seamstress and sewed clothes for herself and others, including her own wedding gown and dresses for her bridesmaids. She was a crafter and could make most anything that piqued her interest. Incredibly organized, she cataloged everything in storage and was never without a small notebook in her large purse to take down notes. She was also excellent at refinishing furniture, including many pieces she bought unfinished, staining and varnishing them to mirror-smooth quality. She appreciated beauty and created it for others to enjoy. A lover of music, she enjoyed playing the piano. She was a beloved wife, mother, daughter, sister, niece, cousin, and aunt, bringing fun to every family event. As a member of Prairie Lutheran Church, she made lasting friendships while nurturing her faith. Most importantly, Llynda is no longer struggling and is now with her Savior. Kind, gracious, and loving to the end, she passed away peacefully on November 27, 2021. She is survived by her husband of 46 years, Jim; son Matthew; siblings Donald (Mary Ann) Edberg, Nancy (Dennis) Bruckhoff, Raymond (Sue) Matz, and Bill Matz; brother-in-law Gary (Cheryl) Rhoades; numerous nieces, nephews, and cousins; and caregiver/family friend, Seahannah. She was predeceased by her father in 1949; mother in 1985; father-in-law, Gael Rhoades, in 2002; special aunt, Leona Meyer, in 2003; and mother-in-law, LaVerne Rhoades; Herb's second wife, Ada; and Herb himself, all three in 2015. A celebration of life will be held on Saturday, December 11, at Washburn-McReavy Funeral Chapel, 7625 Mitchell Rd., Eden Prairie, MN. Visitation 10:00 a.m. with funeral service 11:30 a.m. Luncheon to follow. In lieu of flowers, memorials are preferred to Ovarian Cancer Research Alliance (OCRA) or Prairie Lutheran Church.

Llynda Esther (Edberg) Rhoades was born on August 14, 1946 in Minneapolis, Minnesota to E. Gideon and Lydia E. (Sodeman Nielsen) Edberg. In 1949, her father died and she, her mother, and her 5-year-old brother, Donald, moved to the farm home... View Obituary & Service Information

The family of Llynda E. Rhoades created this Life Tributes page to make it easy to share your memories.

Send flowers to the Rhoades family.