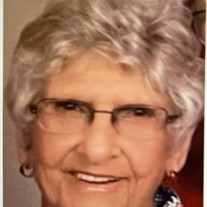 Leota (Lee) Borkowski (Reile), age 86, of Coon Rapids M.N. passed away April 24, 2022 at home with Family and Friends. Lee was born on March 8th,1936 in McClusky ND to Jake and Edna Reile (Lauer) Funeral Services will be held at Faith Lutheran Church in Coon Rapids, MN on May 6 at 11:00 a.m. Where they have been members at Faith Lutheran Church for over 30 years, and a visitation will take place at 10:00 a.m. Reception to follow service. After finishing her education and leaving home at the age of 16, Lee was off being young and having fun making many friends along the way. After marrying Vern, they raised their family of 3 boys in Omaha, NE. They moved to Coon Rapids, MN in 1980 where they lived and spent her remaining days. Lee loved playing cards, board games, and spending time with many good friends. She enjoyed the monthly get together with friends throughout her life. Lee loved reading books and putting puzzles together. She also enjoyed spending time up North at their cabin where many memories were made with family and friends. Lee is survived by her husband of 63 years Vernon, 3 sons; Tylynn (Teri), Kyle (Kim), and Gavin. Brothers; Gary Reile, Harley Reile (Ruth), and sister Peggy Backman (Reile). Brothers and sister-in-law's; Bobbie, Dean Axland (Sharron). Beloved Grandchildren; Brandon (Heather), Garon, Michael, Lance, Jaime, Konrad, Sarah, Taylor and Jackson. Great-Grandchildren; Bryce, Riley, Daxton, and Harper. Also, many other nephews and nieces. Preceded in death by parents Jake and Edna Reile, Carl and Lucy Borkowski, Helene Sue Borkowski, Donna Reile, Gene Borkowski, Bill Backman, Shery Hopkins, Jennifer Wolf, and many other dear friends.

The family of Leota Mae Borkowski created this Life Tributes page to make it easy to share your memories.

Send flowers to the Borkowski family.