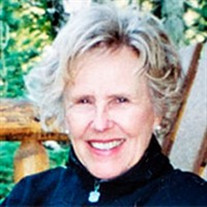 Lindberg, Leona Ann (Nonie) Leona Ann Lindberg (Nonie) passed away peacefully on April 30, 2022. Survived by sons Eric (Andrea), Rolf (Alisa Dale), and daughter Kristin (Andrew). She had five grandchildren Samuel William (Kristen), Ellice Lindberg Chelgren (Anders), August Lindberg, Owen Brown and Ella Brown. She was preceded in death by husband Gordon. Nonie was born February 26, 1928, to parents Esther and Andrew Carlstrom. She grew up with siblings Leo, Lenora, Leola, Leonard, and Leota in Superior Wisconsin. She attended Central High School in Superior graduating in 1946. She was a member of many organizations as her scrapbook will attest such as Honor roll, Girl Scouts, Athenae's, Junior Red Cross, Editor on the Echo, and Choir. She appeared in Curse You, Jack Dalton receiving a recognition of excellence. She had a heart for others at an early age as shown by her caring for her siblings, many friends in school, and organizing support for service men. From her yearbook "She is one of the most polite, sweetest, and charming girls I know. She is one of the most refined girls at Central". She loved music, travelling to Chicago to listen to Frank Sinatra at the Propellor lounge. She continued studies after high school and eventually moved to Minneapolis where she was a secretary at the Grain Exchange. It was while she was rooming with several girls at a house that she was setup on a date with Gordon. They hit it off, but Gordon traveled to California for the good life and was convinced he was going to lose her if he didn't "lock up the deal", so he proposed over the phone. After marrying in 1952, they moved to California where she raised Eric and Rolf. Gordy and Nonie developed many lifelong friendships in California and were active in camping, skiing, and going to the beach. Raising two boys, ages 6 and 4, prompted her to take a Child Psychology course to write a paper to keep her sanity. Moving back to Minnesota in 1967 to be closer to Gordon's parents, she recounts that they moved 14 times in 14 years. Kristin was born after they moved to Edina to settle down for good. In Edina she was active in Bridge, Golf, Gourmet Club, and loved singing in the choir at Calvary Lutheran Church. She also worked as an insurance agent at her brother's agency and later at Americana Bank at 50th and France. Through it all she showed optimism, cheerfulness, encouragement, and offered the levelheaded glue to keep the family together. When Gordy retired, they purchased a home in Rio Verde, Arizona where they wintered and continued to make friends on the golf course and at the bridge table. She had the opportunity to travel and see many places with Gordy. Perhaps the fondest times were summers at Upper Eau Claire Lake with her brother Buck, his wife Norma, and the cousins. Gordy and Nonie were fiercely proud of their independence, and both lived as long as they could at their home in Edina before moving to Sunrise Living. She battled Alzheimer's for years, but always demonstrated a cheerful demeanor to all and was dubbed the "Mayor" by the community at Sunrise. Always carrying music in her heart, she was keeping a beat and waving goodbye just days before passing. Services will be held at 12 noon on Friday May 6 in the Chapel at Lakewood Cemetery, with burial to follow. A reception will follow for friends and family. Memorials can be made to Calvary Lutheran Church (Edina) and the Alzheimer's Association. Washburn-McReavy.com Edina Chapel 952-920-3996

The family of Leona Ann Lindberg created this Life Tributes page to make it easy to share your memories.

Send flowers to the Lindberg family.