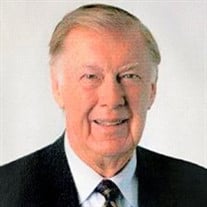 Commers, Lawrence R. Passed away February 10, 2022 in Minneapolis. Lawrence "Larry" was born August 2, 1936 in Robbinsdale, Minnesota, the eldest son of Roman and Evelyn Commers. Larry attended DeLaSalle High School, St. John's University, and graduated from the University of Minnesota in 1958. While achieving his J.D. degree at William Mitchell College of Law, he married his beloved wife Therese (Tessie) Daleki (U of M class of 1960). They made their home in Fridley, Minnesota where Larry volunteered as a collaborative leader and contributor to the City of Fridley for many years, including Chairperson of the Housing and Redevelopment Authority (HRA) beginning in 1976. He was also a member of the City Charter Commission and active in numerous other local, state and national organizations such as St Williams Parish, Knights of Columbus, Northeast Sertoma, and the Catholic Order of Foresters. Throughout their marriage, just 2 weeks shy of 60 years, Larry and Tessie were avid University of Minnesota supporters and sports fans including membership in the University of Minnesota President's Club and the Golden Dunkers. They also enjoyed golf and spending time with their kids, grandkids and friends both in Minnesota and at Redington Shores, Florida. Larry was admitted to, and known for his practice of law in the State of Minnesota; U.S. District Court, State of Minnesota; and U.S. Court of Appeals, 8th Circuit. He appeared as special counsel in 36 states plus the District of Columbia. He is well known for his work as a trial lawyer and mentor; and was voted by his peers as one of Minnesota's Super Lawyers, elected to be included in the Best Lawyers in America for over 10 years. He served as Director, Officer and Shareholder at MacIntosh & Commers, Partner at O'Connor & Hannan, Partner and Attorney at DeWitt Mackall, Crounse & Moore. He was preceded in death by parents, Roman and Evelyn Commers; parents-in-law, Eleanor and John Daleki; sister-in-law Janice (Ted) Chorzempa, and many close friends. He is survived by his dear wife Tessie; brother Frank (Sandy); sister-in-law Judy Daleki, sons: Mark (Carole) Commers, Kevin (Ann) Commers; daughters: Sara (Bob) Miles and Alice (Jim) Grassman. Larry was extremely proud of his grandchildren: Celia, Grace, Christopher (Lindsey), Eryn, Davis, Ryan, Hadley and Lily. He leaves a special group of extended family, nieces and nephews, and many lifelong friends. Larry will be greatly missed by all for his unique sense of humor, his off-key birthday songs, antagonizing whooping noises for the grandkids, and his true and sincere generosity. He is not known for changing oil in his car, minding speed limits, and exiting parking ramps without getting a few dents in his vehicle. The family would like to express deep appreciation to the staff of Pillars of Prospect Park and the Health Partners Hospice Team. Memorials requested to the Lewy Body Dementia Association (lbda.org/...) in honor of Therese Commers. There will be a Celebration of Life at a later date.

The family of Lawrence Commers created this Life Tributes page to make it easy to share your memories.

Send flowers to the Commers family.