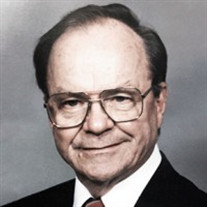 Sulander, Lauri "Lee" Age 94, formerly of Edina and South Minneapolis, MN., passed away in hospice care at the Shell Point Retirement Community in Ft. Myers, FL. on June 2, 2022. Preceded in death by his parents Evert and Eveliina (Sikkila) Sulander, Lee's beloved wife of 51 years Esther (Jody), brothers Emil, Eli, Eino, and Robert, half-brothers George, William, Carl and Walter. Survived by his brother John and sister Laini Wehmhoff, sons Lee and Mark, grandchildren Staci, Christi, Michael and by sister-in-law Edna Tollefsen. As a boy in the Depression, Lee sold newspapers near his home, at 27th and E. Lake St. and at 15, became the youngest-ever rail-yard clerk in the railyard across the street. 2 of Lee's brothers were already at war and Lee wanted to enlist, but his father required him to finish high-school. Lee graduated from South High in '46 and immediately enlisted in the Navy to go to sea, but was stationed state-side. When later called back for Korea, he was in OCS when the hostilities ended. Lee then attended the "U" and later graduated from St. Cloud Teachers College. Lee met Jody when he was working for A.C. Nielsen in the Dakotas, and when they moved to Minneapolis, Lee began his long career in real estate at Bermel-Smaby. There, he was fortunate to be mentored by Ben Bermel and Phil Smaby. As a young family in south Mpls., Lee and Jody and their sons lived near Lake Harriet and were active members and volunteers at Mt. Olivet Lutheran Church and Cathedral of the Pines camp. Along with his faith in God, Lee was well known for his irrepressible positive attitude. His enthusiasm, energy and positive outlook on life were contagious, and he was known as a fun person to be around. Throughout their son's school years in Mpls., and later in Edina, Lee and Jody volunteered in the Boy Scouts, band, gymnastics, and other programs. The family also enjoyed many camping trips over the years, towing their camper across much of the U.S. and Canada. Lee was also active in the Mpls. Exchange Club, the Chamber of Commerce, and was a Master Mason. Over time, Lee became well known and respected in the Twin Cities as a leader in real-estate, and served as a director on the Mpls. Board of Realtors and was a co-founder and partner at Realty Center, Inc. in Edina. Lee and Jody also co-founded Jo-Lee Properties, which included properties in suburban Mpls. and the Naples, FL. area. In Naples, Lee was a grade-school reading tutor, a volunteer at the Collier Co. Sheriff's Dept., and a 15-year volunteer at the Coast Guard Auxiliary. In recent years, when his body slowed down and it became more difficult for him to walk, Lee maintained his positive attitude. He set challenging goals for himself in physical and occupational therapy and gave it 110%. His attitude and example were an ongoing inspiration to many staff and other residents, along with his favorite saying to everyone: "God is Love". A funeral and celebration of life service will be held in Minneapolis, later this year.

The family of Lee N. Sulander created this Life Tributes page to make it easy to share your memories.

Send flowers to the Sulander family.