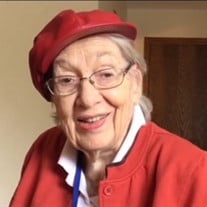 LAURA VANDE WAA age 106 of Bloomington, MN passed away on Monday October 25, 2021. She was preceded in death by her mother Elfreda Rose, husband, Gary, and son Jack. Survived by daughter-in-law Diane; grandsons David and Dan (Cindy); and great-grandsons Jonathan and Michael. Laura had a long and eventful life. As a young girl in Anoka, MN she showed that girls could jump off the riverbanks just like the boys. Nothing was going to hold her back. The Pythian Sisters were a large part of her and her mother's life. She officially joined the Order in 1932 when she was 17 years old. She led her life following the Pythian Sister's principals of Purity, Love, Equality and Fidelity to the best of her ability. In 1935 Laura married her high school sweetheart. While the marriage did not work out, their relationship brought Laura, her greatest joy. In July of 1936 her son, Jack was born. After leaving Lester Laura moved to Hawaii to be with her Mother and Stepfather. There, she held a job working for the Army. She fell in love with the quarterback and star of the Army football team, Gary Vande Waa. They had a short courtship and were schedule to be married Dec 7, 1941. Due to the events of the day their wedding was postponed until Dec 10th. Gary, along with her stepfather and brother, were sent off to serve in the war. Laura and her 5-year-old son, Jack took a ship back home in the spring of 1942. During the war Laura stayed active with the Pythian Sisters and raised her son with the support of her mother and the other women in the Order. In 1971 she was blessed with the honor to be selected to be the Pythian Sister's Supreme Chief. She served for 3 years and travelled the country visiting temples and fellow Sisters. Gary and Laura settled in Bloomington, MN where they were able to be close to Jack, his wife Diane and their two sons David and Dan. Laura picked up bowling and was known by all the neighbors as the "Cookie Lady". She would bake dozens of dozens of cookies to share with the church, friends, family, and everyone who came to her door during the holiday season. During her last few years, she became weak and needed to move into an assisted living facility. There as with everywhere she went, she continued to spread joy and love and the principals she learned as a member of the Pythian Sisters Order. Laura will be greatly missed but her love and our memories of her will go on forever. Memorial service 11:00 am Nov. 20 at St Mark's UCC church, 8630 Xerxes Ave S, Bloomington, MN. Visitation 1 hour prior to service. In Lieu of flowers, memorials preferred to St. Mark's.

The family of Laura Elfreda Vande Waa created this Life Tributes page to make it easy to share your memories.

age 106 of Bloomington, MN passed away on Monday...