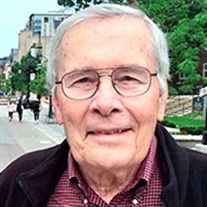 Henneman, Larry Ray died peacefully on March 14th. He was born and raised in River Falls, WI. He played basketball in high school and looked forward to playing in college at the University of Wisconsin, River Falls. His mother's illness forced Larry to help run the family business which kept him from basketball, but ultimately led him to the Debate team. Larry credits his joy of debate for his decision to pursue a legal career. Larry received his JD from the University of Wisconsin, Madison, started practicing in 1959 and his career ultimately spanned more than 50 years. He began his legal career in the United States Air Force where he achieved the rank of Captain. Larry was proud to be a partner at Gray Plant Mooty and Rider Bennett law firms, practicing as an esteemed Trusts & Estates attorney. He was the practice group chair of the team at Rider Bennett for many years. Larry was a member of the American College of Trusts & Estates Counsel which described him as "truly a giant in the Minnesota Trusts & Estates community." Larry generously shared his talents for the betterment of his commun-ity. He chaired the church council at St John's Lutheran Church in Minneapolis and was later active at Mount Olivet Lutheran Church in Minneapolis, lead the Kiwanis Club of downtown Minneapolis and chaired the Board of Interlachen Country Club in Edina. He also served on the boards of the Leukemia and Lymphoma Society of MN and AAA Minneapolis. After marrying, Larry traded in his basketball for a tennis racquet and enjoyed his weekly doubles tennis matches with close friends - many of whom he continued to meet for breakfast every Saturday until 2020. He also enjoyed golf, especially when playing with his beloved spouse of nearly 62 years, Priscilla, who passed away 10 months before him. Larry's family takes comfort in knowing that the two of them are reunited. Preceded in death by parents Ray & Elsie; brothers Paul (Roz), Dale, and Jack (Barb) and wife Priscilla. He is survived by children Mark (Terri), Susan (Doug) Kimbrel, and Beth Dudgeon. Grandchildren Stephanie (Dan), Jeff, Matt, Ryan, Jenna, Courtney, and Ally and great-grandchildren Aidan and Carson. He is also survived by cousins, nieces, nephews, friends, law firm partners, and clients. A celebration of Larry's life will take place on Thursday, April 14th at 11am with visitation one hour prior at Mount Olivet Lutheran Church, 5025 Knox Avenue South, Minneapolis. Memorials preferred to Mount Olivet Lutheran Church. Washburn-McReavy.com Edina Chapel 952-920-3996

Henneman, Larry Ray died peacefully on March 14th. He was born and raised in River Falls, WI. He played basketball in high school and looked forward to playing in college at the University of Wisconsin, River Falls. His mother's illness forced... View Obituary & Service Information

The family of Larry Ray Henneman created this Life Tributes page to make it easy to share your memories.

Send flowers to the Henneman family.