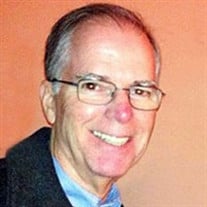 Gormley, Kevin Thomas of Edina passed away Tuesday, January 5, 2021. Preceded in death by parents Frank and Lucy Gormley, and sister Kathleen Wetherall. Survived by brother Mike Gormley, sister Joan Belanger, nieces Maria (Leo) Wetherall, Anita (Paul) Axt, Suzanne (Charles) Rennolet, Shannon (Scott) Gormley, Erin Gormley and nephews John (Carrie) Wetherall, Nick (Tracy) Wetherall, Dominic Gormley, Brian Belanger, Mitch Belanger, and Tom (Diane) Belanger, and many grand nieces and nephews. Kevin was born March 16, 1946 to a loving family in Southeast Minneapolis. A lifelong Minnesotan, he graduated from Minneapolis South HS and later from the University of Minnesota. After trying his hand in a few occupations, Kevin embarked on a long career at Fairview Health Services, where he put his technical and film skills to work in their media and education department. During retirement, Kevin's quiet, gentle manner served him well as a Stephen's Minister at Our Lady of Grace Catholic Church where he formed many lasting friendships. Kevin was a loving brother, adored uncle and dear friend to many. He was an avid tennis player, a knowledgeable bird watcher, an expert photographer and a devout Christian. Family was very important to "Kev". He spent many hours dedicated to genealogy research as his Irish heritage was a cornerstone of his life. He loved holiday gatherings, attending activities of his grand nieces and nephews, time at "the Brule", and family cabins in Wisconsin. A steady, constant presence, his love, kindness, soft spoken intelligence and wit will be dearly missed. Mass of the Christian Burial will be held on Tuesday, January 12 at 10:30am at Our Lady of Grace Church, 5071 Eden Ave, Edina, MN. Social distancing protocol will be adhered to. The mass will also be live streamed via the following link: olgparish.org/mass/… In lieu of flowers donations suggested to Alzheimer's Association of Minnesota. Washburn-McReavy.com Edina Chapel 952-920-3996

The family of Kevin Thomas Gormley created this Life Tributes page to make it easy to share your memories.

Send flowers to the Gormley family.