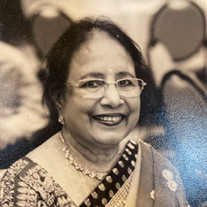 The Life of Kanak Lata Agrawal Today we honor the life and legacy of Kanak Lata Agrawal. Kanak was a very special person who filled all our lives with her sparkle, love, and laughter. Her memories will always live in our heart and soul. Kanak asked for little and gave wholeheartedly throughout her life. Kanak Lata Agrawal was the eldest of the six children of Magan and Meera who was born on the banks of the Yamuna River in Mathura, India on September 20th, 1948. She grew up in a lively house with 5 siblings: Vinay, Kusum, Kumud, Madhu and Rajiv. Kanak often acted as a second mother to her siblings, being the oldest. Kanak found her soulmate Kishan on February 28th, 1966 who took her to his hometown of Allahabad. Their marriage was based on mutual love and respect. Kishan called her his queen, Rani, and always took care of her with gentleness and kindness. Love like theirs is hard to find. Kishan and Kanak raised their two daughters, Priti and Anshu, to be independent thinkers. In March of 1986, Kanak with her family decided to immigrate to Minneapolis, Minnesota to be with her parents, siblings and many relatives. Kanak decided to join the family business and quickly became the operations manager and second in charge working hand-in-hand with her father and mother. Kanak's sales skills and business ethics helped the family business flourish from 1986-2005. In 2006, Kanak joined the business of her sister Kusum and Brother-in-law Satyendra as the store manager. Kanak's family grew in May of 1993 when Priti married Sanjay, and in March 1997 Anshu married Vishal. Kanak loved being a Nani (grandmother) to her 5 grandchildren, Surya, Pratha, Shivam, Sajel and Sanjana. Kanak always had a positive attitude towards life in spite of many adversities including her struggles with Parkinson's disease. She faced challenges with a smile and perseverance. Kanak is known for her joy in hosting and preparing sumptuous meals and desserts for everyone in her life. Kanak's culinary art will be missed by everyone whose palates were spoiled by her cooking. Her other interests included, playing cards, candy crush, spending quality time with her grandchildren and family, and looking elegant! Kanak left us on March 22nd, 2022. She will be cherished forever by her family, friends, and the community she built here in Minneapolis and in India.

The Life of Kanak Lata Agrawal Today we honor the life and legacy of Kanak Lata Agrawal. Kanak was a very special person who filled all our lives with her sparkle, love, and laughter. Her memories will always live in our heart and soul. Kanak... View Obituary & Service Information

The family of Kanak L. Agrawal created this Life Tributes page to make it easy to share your memories.

The Life of Kanak Lata Agrawal

Today we honor the life and legacy...

Send flowers to the Agrawal family.