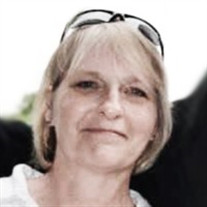 Erickson, Julie M. It is with much sadness that we announce the passing of Julie Marie Erickson in her home in Minnetonka, after a three-year battle with cancer, surrounded by family May 1, 2022 at the age of 64. Julie was born in Minneapolis, Minnesota on August 26, 1957 the daughter of Lawrence and Evelyn (Beadell) Bleninger. The family moved to Browerville, MN in 1970 where Julie learned the love of keeping and riding horses and later flying her father's airplane. After graduating from Browerville HS in 1975, Julie trained as a medical lab technician, and then as a registered nurse, graduating from St. Cloud School of Nursing in 1983. Earning top scores on her state boards, she worked in cardiac intensive care units in Fargo and Duluth before returning to Minneapolis. She continued in nursing until, needing a break from the medical field, she became a GIA certified gemologist. But her love of nursing brought her back, earning a BSN from St. Catherine University in 2003. She worked in the Park Nicollet system in urgent care and travel until her diagnosis in 2019. Julie was married to Michael J. Erickson September 13, 1986. Their daughter, Kendall, was born in 1990 and the following decades were spent happily with family and friends. Julie enjoyed giving gifts and gave her time freely. She never missed a chance to gather with family. She was always only a phone call away when someone was ill. She filled her home with warmth, decorating for each season with cherished antiques. Her endearing qualities were many: When in the car, she would say "turn right here" when she really meant turn left twenty yards back. At family gatherings she could be seen mixing wines in her glass until she got the sweetness "just right." Julie is survived by her husband Michael, daughter Kendall, sister-in-law Laurie Erickson; siblings Pam Motzko, Waterville; Judy Lemm, Waseca; Scott Bleninger, Hastings; Kerry Bleninger, Faribault; many nieces and nephews. She will be greatly missed. A private family gathering will be held this spring.

Erickson, Julie M. It is with much sadness that we announce the passing of Julie Marie Erickson in her home in Minnetonka, after a three-year battle with cancer, surrounded by family May 1, 2022 at the age of 64. Julie was born in Minneapolis,... View Obituary & Service Information

The family of Julie Marie Erickson created this Life Tributes page to make it easy to share your memories.

Erickson, Julie M. It is with much sadness that we announce the...

Send flowers to the Erickson family.