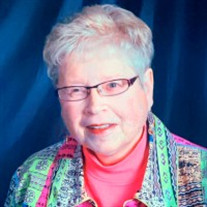 Bonnes, Judith H. On Monday, 03/21/2022, Judith H. Bonnes, devoted wife, mom and friend, passed away at age 76. Judy was born in north Minneapolis, MN to Dominic and Helen Bona. Dominic had a stroke seven years later, leaving him disabled, so the family scraped by with Judy sleeping in the living room with her mom until she was 18. She attended the University of Minnesota where she met her husband John Bonnes. They married in 1966, and raised two sons, John L and Jeff, in South Minneapolis and Bloomington. Judy's spirit was legendary. She was always busy, whether it was participating in neighborhood activities, performing service in her Lutheran church, crafting, or helping to rehabilitate and manage several rental properties. Her restless spirit lent itself well to traveling with John, including camping with the kids, but also trips abroad to explore Europe, and visiting Australia to see her grandchildren. In 2003, a stroke made significant portions of the left side of Judy's body immobile, but her spirit remained mostly unphased. She had always prioritized relationships - making friends from kindergarten thru the last year of her life, and seemingly all of them remained friends to the end. She also valued family, her immediate and her grandchildren, but also extended family with whom she often organized reunions. When John passed suddenly in 2020, she rallied again: arranging care, finding a new place to live, selling the house, working out religiously in the on-site pool, and of course making yet more new friends. She remained excited about the possibilities that life could provide until the very end. Judy is survived by her son John L and wife Chrissie, son Jeff and wife Delia, grandchildren Elise, John W, Meg and Tom, brother Steven Bona and wife Lori, and daughter in spirit Diane Rauch and husband Don. She was preceded in death by her dad Dominic, mom Helen, brother Jerry Bona and his wife Terry. A memorial service will take place on Friday April 1st at 10:30 AM at Cross View Lutheran Church, with visitation starting at 9:30. Lunch will be served on-site immediately after. Live streaming will be available through crossview.net/sermons. Memorial donations may be sent to Planned Parenthood, TPT or Union Gospel Mission in St. Paul. Washburn-McReavy.com Werness Brothers 952-884-8145

The family of Judith Helen Bonnes created this Life Tributes page to make it easy to share your memories.

Send flowers to the Bonnes family.