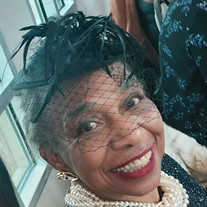 We remember our beloved Joyce Irene Acosta of Brooklyn Center who died June 8 at North Memorial Medical Center in Robbinsdale, MN. Joyce was struck by a motorist on June 1 while running errands near Xerxes Ave. N. and Bass Lake Rd. Joyce was born Feb. 11, 1938, in Minneapolis, the eldest child of Clarence C. Underwood Jr., of Minneapolis, and Maxine Shirley Jackson, of Buxton, Iowa. Her paternal grandfather, Clarence C. Underwood Sr., of Ohio, was a WWI veteran and ardent church worker in Minneapolis. Her paternal grandmother, Julia Wallace, was born in Hastings, MN, in 1889, and her maternal grandparents, Marcus H. Jackson, of Spring Creek, IA, and Irene Prentice, of Alabama, emigrated to the Twin Cities from mining towns in south central Iowa during the Great Depression. Joyce grew up with her parents and extended relatives in the handful of neighborhoods in North and South Minneapolis to which Black Americans were restricted before the Federal Fair Housing Act of 1968. She was an emphatic storyteller who had a vivid memory of the people and places comprising the Twin Cities Black communities. As a teen, Joyce worked at a beauty salon at 27th and Portland Ave. S owned and operated by Zephyr Turner and Adeline (A.D.) Adams. She and her brothers benefited from youth programs at Phyllis Wheatley Community Center, which, like the beauty shop, was a vital crossroads and cultural incubator for Minneapolis's cordoned-off Black communities. Joyce carried bitter memories of the racism, classism, gender discrimination and sexual exploitation that were integral to Twin Cities culture in the 1940s, '50s and '60s. She and her family nevertheless claimed their right to public spaces: the Chain of Lakes, Como Park, the Minnesota State Fair, the Minneapolis Institute of Arts and YMCA summer camp. As a child, Joyce attended Lafayette School, Phillips Junior High, South High and Miller Vocational High School. The staunchly independent youth spent her teen years frequenting the Minneapolis Institute of Arts and, in 1950, received a scholarship to study at the Minneapolis School of Fine Arts, now the Minneapolis College of Art and Design. She felt it important to remember that she was almost always the only Black person at the museum and art school. After studying commercial art in high school, Joyce settled into the life of a homemaker who worked part-time jobs to make ends meet. Joyce married Phillip William Acosta, an iron welder of Black and Mexican ancestry, on June 18 1960. In 1967, when Joyce was pregnant with her first child, Phillip Jr, the couple purchased a home for $18,000 in Brooklyn Center, circumventing racist efforts to deny their moving in and becoming one of the first Black families to settle in an area populated by cash-poor but credit-rich Polish, Germans and Scandinavians who, as Joyce put it, "hardly spoke to one another." She would live in that home on Indiana Ave. N. until she died. Joyce is preceded in death by her husband Phillip W. Acosta (1934-2002), her brothers Charles M. Underwood (1941-1970), Joel A. Underwood (1939-1999), Clarence C. Underwood III (1940-2014) and Richard C. Underwood (1942-2020). She is survived by her sister Georgette McGriff (of Dallas, TX), her son Phillip William Acosta Jr., daughter Marquita Fox, grandchildren Mikayla and Kameron Fox and generations of nieces and nephews. Funeral service will be held on Monday, June 20th, at McReavy Crystal Lake Cemetery (3816 Penn Avenue N, Mpls, MN 55412). Reviewal begins at 11am; burial will follow a 12pm service. Repast will be held at the Courtyard by Marriott - Minneapolis West, 9960 Wayzata Blvd, St. Louis Park, MN 55426 from 2-5 PM.

The family of Joyce Irene Acosta created this Life Tributes page to make it easy to share your memories.

We remember our beloved Joyce Irene Acosta of Brooklyn Center...

Send flowers to the Acosta family.