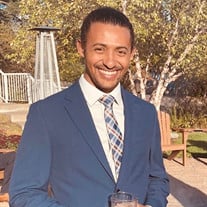 Jordan Marcus Jergenson, 30, passed away on Wednesday October 20th, 2021. He was born on July 16th, 1991, in Mankato, Minnesota to Marie Jon Jergenson. He and his mother moved to be near their family in their hometown of Benson, Minnesota where he was a vibrant, energetic, and loving little boy. They then moved to Brooklyn Center, Minnesota where Jordan attended his beloved Garden City Elementary School and Brooklyn Junior High. Jordan was involved in the Brooklyn Center community by participating in the Brooklyn Park Athletic Association football and basketball leagues as well as activities at The Church of Jesus Christ of Latter-day Saints, Single Creek Ward. Jordan especially loved how all these activities came together at the highly contested church youth basketball league each year. Jordan then went on to attend Park Center High School where he excelled academically and participated in a variety of activities. He particularly enjoyed his time on the Park Center Swim and Dive team but his true passion was being involved with the music program. Jordan was a percussionist in the concert band and jazz band, and he was a drumline leader with the highly decorated Park Center Marching Pirates. During this time, he also enjoyed his friends and established close and meaningful relationships that he maintained for the rest of his life. Throughout his schooling, Jordan was a part of the Boy Scouts of America where he attained the rank of Eagle Scout and became a member of the Order of the Arrow, an achievement that he was proud of. Jordan went on to attend St. Cloud State University and the University of Minnesota, Twin Cities where he studied Political Science. Professionally, Jordan worked for the Minneapolis Park Board where he developed a passion for turf maintenance as a Greenskeeper. He also believed in the mission of the park board as a park system for all and he enjoyed feeling like his work was a part of something bigger than himself. Contributing to the community alongside his colleagues was also a highlight of the job. He also worked as a part of the distilling team at Norseman Distillery where he enjoyed the process of creating spirits and the company of the people he worked with. Throughout his life, Jordan's true passion was his involvement in the marching arts community as both a performer and an educator. He was a member of several organizations including Twin Cities Area Independent, River City Rhythm, the Minnesota Timberwolves PACKcussion, the Minnesota Vikings Skol Line, and Minnesota Brass. Jordan found a true sense of community within the Minnesota Brass family. He was proud to be a part of the cymbal line in the Minnesota Brass Drum Corps show, Valhalla, that placed first at the DCA world championships. He was also the flower in the MBI Indoor show, Dandelion, a role that brought him immense pride and recognition within the community and was a true expression of his larger-than-life personality. As an educator, Jordan left a profound legacy as a cymbal instructor within the Minnesota marching community and beyond. Over the years, he taught at several programs and left a lasting influence on countless individuals. Jordan loved his students and they loved him back in a way that was both sincere and special. His cymbal lines were continually made up of the most passionate and hardworking students and this was a direct result of his deep commitment and positive influence. Jordan made a lot of students better cymbal players but more importantly, he made them all better people. Jordan was loved beyond measure. Jordan is survived by his mother, Marie Jon Jergenson; maternal grandparents, Donald and Judi Edwards; uncle, Wesley Edwards (Carolyn); godfather, Lance Piner (GaVae); godmother, Amanda Jacobson; father, Timothy Stotts; paternal grandmother, Ruth Stotts; and numerous siblings and family members on his fathers side. Jordan is also survived by his longtime girlfriend, Ellie Mehr; their beloved cat, Pearl; and countless best friends whom Jordan cherished. Jordan was preceded in death by his maternal great grandmother, Lillian Jergenson "Gigi"; uncle, Nicholas Edwards; and best friend, Matthew Roessler. Jordan was loved to the ends of the earth by many. Blessed be his memory. Jordan's life will be celebrated on Thursday, October 28th, 2021, at Washburn-McReavy, Edina Chapel. Visitation is 2:00pm-4:00pm followed by the funeral service at 4:00pm. Live stream: https://view.oneroomstreaming.com/authorise.php?k=1635449658145177

Jordan Marcus Jergenson, 30, passed away on Wednesday October 20th, 2021. He was born on July 16th, 1991, in Mankato, Minnesota to Marie Jon Jergenson. He and his mother moved to be near their family in their hometown of Benson, Minnesota where... View Obituary & Service Information

The family of Jordan Marcus Jergenson created this Life Tributes page to make it easy to share your memories.

Send flowers to the Jergenson family.