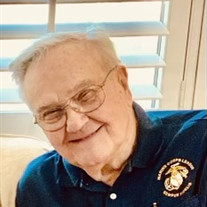 John was welcomed as a good and faithful servant into his heavenly home on Sunday morning, November 14th after 91 happy and prosperous years on this earth. He was the firstborn to John and Irene (Drake) Winter on January 22, 1930 in St. Paul and spent most of his early years on the West side of St Paul. He graduated from Humboldt High School in 1947 where he was most interested in history. While he carried that interest on to Macalester College, his academic pursuits were interrupted when his Marine Corps Reserve unit was called up to serve in Korea in 1950. John was proud of his 15 years in the Marines, with 13 months active duty in Korea where he accumulated three major battle stars on the Korean service medal - the Inchon Invasion, North Korean Aggression and Chinese Aggression. John married Macalester classmate, Beverly (Nelson) Winter while on leave in 1951 and they settled in North St Paul in 1956 where they raised three children, John, Jim and Lynn. He pursued a career in insurance where he owned John Winter Agency and Midwest Hearing Industries where he was a pioneer in selling hearing aid insurance on a nationwide scale. He also became active in local politics, once knighted by King Boreas as the "Prince of Pre-eminent Politics" during the Winter Carnival. John began his civil service career by serving three terms as Mayor of North St Paul from 1961 until his mayoral duties were disrupted upon his election to the MN State House of Representatives in 1967. He served in the legislature until 1971. He obtained his pilot's license in the 1960's and continued his civil service in the Civil Air Patrol. He also provided flights for medical patients in need through Angel Flight and LifeLine Pilots. Flying was one of his greatest joys and he maintained his license into his 70's, flying annually to Palm Desert California to enjoy his other passion, golf. John loved golfing and found his paradise in Palm Desert. His home there was a respite from the winter cold for many years and he had numerous visitors, always the consummate host. He also shared his lifelong passion for history as a docent at the Palm Springs Air Museum. While in Minnesota during the summertime, he enjoyed hosting family pool parties at their home in Bloomington. He was a wonderful husband, father, grandfather and friend. John is survived by his loving wife of 27 years, Win Naughton Winter; his children John (Gretchen), Jim (Kim) and Lynn (Stephen) Lindgren; loving stepchildren, numerous grandchildren and great-grandchildren as well his brothers Ron (Margaret) in California and Jeff (Dee) in Arizona; nieces, nephews and many friends and associates. He was preceded in death by his parents, sister Barbara, and first wife Beverly. Visitation Sunday, 11/21 from 3-6pm at Washburn McReavy Edina Chapel, 5000 W 50th & Hwy 100. Funeral service Monday, 11 am, Grace Church, Eden Prairie campus, Door 2. Visitation one hour prior to service. Burial at Ft Snelling, Wednesday at 12:30 pm.

John was welcomed as a good and faithful servant into his heavenly home on Sunday morning, November 14th after 91 happy and prosperous years on this earth. He was the firstborn to John and Irene (Drake) Winter on January 22, 1930 in St. Paul... View Obituary & Service Information

The family of John Burton Winter created this Life Tributes page to make it easy to share your memories.

John was welcomed as a good and faithful servant into his heavenly...

Send flowers to the Winter family.