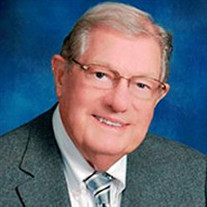 Thomson, John E. 94, of Bloomington, MN, passed away peacefully on February 24, 2022. John, the middle child of Palma and Robert (Milt) Thomson, was born on 9/5/1927 in Winona, MN. He attended Winona Public Schools. In 1945 he entered the Navy V5 program. After his military service, he attended and graduated from the University of Minnesota with a degree in Business Administration. He joined the bakery sales division of Pillsbury in June, 1954. Four years later, January 10, 1958, he married Elaine Zeman, another Pillsbury employee. His career with Pillsbury took him to various locations, including Ohio, San Francisco, Seattle, Minneapolis, Los Angeles and finally back to Minneapolis in 1975. He found great satisfaction and pleasure working with the customers and other employees at Pillsbury. He retired in 1988 as a national sales director. John and Elaine wintered in Rio Verde, AZ, for over 20 years. They were active in Lutheran churches in California, Minnesota and Fountain Hills, AZ. John loved music and loved to sing. He sang in church choirs for 80 years, including 40 years singing in church choirs with Elaine. His wife, Elaine, passed away in June of 2011 from ALS. About a year later, he met Caryl Minnetti in the church choir. As part of their friendship, they enjoyed traveling, including travel to France and the Pacific Northwest. Caryl passed away in 2020. John moved to Founders Ridge in 2020, where he made many close friends, in particular Carol Caraway. John lived life to the fullest. He enjoyed being with peopleas a matter of fact, it seemed like every time he walked into a room, he made new friends. He enjoyed a good discussion and debating different points of view. He loved gardening, flowers, music, concerts, travel good food, fine wine, tennis, golf, family, and friends. He was generous with his love and with his resources. Those who knew and loved him were the benefactors of his encouragement, support, hospitality, and friendship. Blessed be his memory. John is survived by his son, David, brother, Robert and sister, Marian. He was preceded in death by wife, Elaine; daughter Martha; and parents Palma and Robert (Milt) Thomson. A celebration of life will take place on March 16th at Transfiguration Lutheran Church; visitation at 10:00 a.m., service at 11:00 a.m., with reception to follow. Private interment. Memorials to the music program or local mission program at Transfiguration Church, Bloomington, MN. Washburn-McReavy.com (952) 884-8145

Thomson, John E. 94, of Bloomington, MN, passed away peacefully on February 24, 2022. John, the middle child of Palma and Robert (Milt) Thomson, was born on 9/5/1927 in Winona, MN. He attended Winona Public Schools. In 1945 he entered the Navy... View Obituary & Service Information

The family of John Edward Thomson created this Life Tributes page to make it easy to share your memories.

Send flowers to the Thomson family.