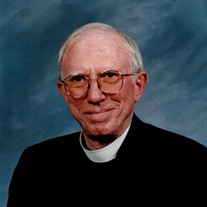 Rettger, Rev. John H. Born Feb. 12, 1935, John passed away peacefully on Feb. 13, 2022, having just celebrated his 87th birthday. He was born in Ann Arbor, MI and during the War moved to Washington D.C. He went to Carleton College where he met Eudora Stewart. They married in 1954. He finished his BA in Connecticut then went to St. Chad's Anglican Seminary in Regina, Sask. He was ordained deacon in 1959 and priest in the Anglican Church of Canada in 1960, serving churches in Sask. until 1963 when he returned to the U.S. The rest of his ministry was in parishes of the Diocese of Minnesota: Willmar, Spring Lake Park, Annandale, St. Mary's (St.Paul), St. Paul's and St. Mary's (Minneapolis). In 1998 he was installed as an honorary Canon at the Episcopal Cathedral of St. Mark, and in 2008 he was awarded an Honorary Doctorate of Divinity from the College of St. Chad. John loved preaching, teaching and travel. He led Cathedral pilgrimages to Israel, Spain, France, Ireland and England. He ministered to everyone regardless of their status but with a fervor for those at the margins. He marched with Dr. Martin Luther King in Selma, AL, developed ministries for the mentally ill, started a parish food shelf and preschool, a bible study at the YMCA, helped start Habitat for Humanity in Anoka County and in 1979 was the first chaplain appointed by a Bishop to serve gay and lesbian persons in the Episcopal Church. He was involved in Diocesan activities throughout his ministry. He was active in Diocesan Christian Education and served on the board and as camp director at Cass Lake Episcopal Camp. He was elected to the Diocesan Council, Standing Committed, and in 1979 was elected Clerical Deputy to General Convention. Survived by his loving wife of 68 years, Eudora, his children Cathy Rettger (Mark), Celia Mattke (Tedd) , Chris Rettger (Mary), grandchildren Liz Dapp (Tony), Julie Hirshenson (Lucas), Ben Mattke, Nick Anderson (Jahnai) and great grandchildren Honor, Sailor, Audrey, Micah, Cali, Brynlee, and Mason. Predeceased by his son Jim. John is remembered by friends and family for his sense of humor, great conversation, interest in everything and everyone around him, and desire to keep learning throughout his life. Funeral services will be held at The Episcopal Cathedral of St. Mark, Minneapolis, on Thursday May 26, 2022 at 10am. It will also be live-streamed. https://boxcast.tv/view/the-reverend-canon-john-h-rettger-memorial-office-459313 Memorials, in lieu of flowers, may be sent to The Episcopal Cathedral of St. Mark. www.washburn-mcreavy.com

Rettger, Rev. John H. Born Feb. 12, 1935, John passed away peacefully on Feb. 13, 2022, having just celebrated his 87th birthday. He was born in Ann Arbor, MI and during the War moved to Washington D.C. He went to Carleton College where he... View Obituary & Service Information

The family of John Hubbard Rettger created this Life Tributes page to make it easy to share your memories.