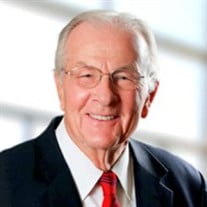 Nilsen, John A., M.D. It is with heavy but grateful hearts that we announce the passing of John Anton Nilsen, M.D. 90, on Tuesday, December 14, 2021. He passed peacefully with family by his side. John was born on February 13, 1931 in Rothsay, Minnesota. He was the son of the Reverend O.B. and Esther Nilsen, brother of James and Laura. John spent a majority of his childhood in Mobridge, South Dakota and Red Wing, Minnesota before attending Augustana Academy for high school. John put himself through St. Olaf College, graduating first in his class, and went on to the University of Minnesota Medical School. During his residency in Minneapolis, John met the love his life, Shirley, who was a nursing student at St. Olaf. John and Shirley were married on August 23, 1958 and had 63 wonderful years together. John and Shirley raised a beautiful family: John, Jr. (Jane, children Jennifer, John III and Jill); Cindy Engquist (children Elise and Luke); Kari Vanderbilt (Erik, children Will and Drew); and Stephen (children Gordy and Rowan). John served as a Captain and flight surgeon in the US Air Force until he and Shirley moved to Edina, Minnesota, where John joined Eye Physicians and Surgeons in 1965. John served as the Chief of Staff at Fairview Southdale Hospital in 1978, and continued a role as a Board Member of the Fairview Foundation until his retirement at 78 in 2009. Throughout their marriage, John and Shirley traveled the world and shared their love of travel with their children. They spent many happy years at their homes in Edina, Venice, Florida and the cabin on Green Lake, and John always looked forward to his annual fishing trip to Canada with his medical school buddies. "Boppa" was so very proud of his children and grandchildren, and was supportive of their varying endeavors and education. He made holidays special and loved to celebrate each and every birthday. John was involved in multiple causes and he spread his knowledge, generosity and compassion to many organizations: helping to open a Fairview clinic in Bangladesh, going on a medical mission to Honduras with his daughter Kari, supporting the Minneapolis Institute of Arts, and as a member of the Board of Regents at St. Olaf College. John was also dedicated to his service at Mount Olivet. John was devoted to his family, medicine, learning and giving. He will be missed and remembered with love by all who knew him. He is survived by his family, in-laws, nieces, nephews and friends. John was preceded in death by his parents, his brother Jim, sister Laura, son- in-law Steve Engquist, and 2 grandchildren: Lucia Engquist and Holden Nilsen. The family would like to thank the staff at Friendship Village, Bloomington, for their excellent care in the last 3 years. Thanks also to the staff in the ER at Fairview Southdale, for making John's final hours peaceful. His passing occurred at a place very dear to his heart. Memorials preferred to Mount Olivet Lutheran Church or St. Olaf College. A celebration of John's life will be held at Mount Olivet Lutheran Church, 50th and Knox Street in Minneapolis on Wednesday, December 22, with a visitation at 11 AM and service at 12 PM. COVID protocols will be followed (masks required for non-vaccinated persons and recommended for others) and the service will be streamed at Livestream link to service: https://player.vimeo.com/video/657545611?h=9918efea36

Nilsen, John A., M.D. It is with heavy but grateful hearts that we announce the passing of John Anton Nilsen, M.D. 90, on Tuesday, December 14, 2021. He passed peacefully with family by his side. John was born on February 13, 1931 in Rothsay,... View Obituary & Service Information

The family of John Anton Nilsen created this Life Tributes page to make it easy to share your memories.

Nilsen, John A., M.D. It is with heavy but grateful hearts that...

Send flowers to the Nilsen family.