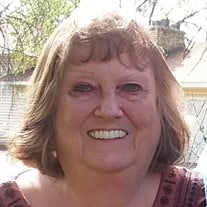 Jo Evelyn was born May 12, 1948, in St. Paul as the younger child of Paul Sr. and Gwendolyn (known as Betty) Woodworth. She attended North St. Paul High School, where she met and began dating George Ziebarth during their senior year. After graduation in 1966, George enlisted in the Navy. Jo Evelyn watched from afar as the love of her life was assigned to the U.S.S. Coral Sea during the Vietnam War. They married May 18, 1968. Soon after, Jo Evelyn joined George on the military base in Bremerton, Washington, where they welcomed daughter Lori in 1969. They returned to Minnesota in 1970, settling in St. Paul. George and Jo Evelyn found their forever home in Coon Rapids in 1976. They welcomed son Brent in 1978. Their family was complete, and the house was full of love. That love grew as they became Grandparents and the house became the site of many cookouts, birthday parties, holiday celebrations - always including the amazing food that was expertly prepared by Jo Evelyn. Jo Evelyn was fiercely devoted to her family. She attended every game, Scout activity, pageant, concert and events her kids were involved in - encouraging them take part in things they really liked and to step away from things that no longer brought them joy. A life lesson. Her motto, "Because that's what families do," was seen each day in her generous love and support of her husband, children, daughter-in-law and grandchildren. Jo Evelyn's favorite travels were the camping getaways to explore Minnesota State Parks with George. Their adventures also introduced them to good friends and camping buddies, Wayne and Shirley. The trips always included favorite foods, competitive fishing contests, fun board games, roaring campfires and wonderful memories. It's during these times Jo Evelyn found peace and rejuvenation. To have that element in her daily life, she delighted in finding and filling their home with woodsy items that reminded her of her favorite place to be. Jo Evelyn is proceeded into Heaven by parents Paul Sr. and Gwendolyn (Betty), and brother Paul Jr. She is survived by her loving husband and best friend of 53 years George, children Lori and Brent (Jenny), and grandchildren Katrina, Kevin, Kaylee, Jack, Katelyn, Kendra and Keagan. In honor of Jo Evelyn, please dress casually during the visitation. (Jeans are perfectly acceptable.) She would want everyone to be comfortable.

Jo Evelyn was born May 12, 1948, in St. Paul as the younger child of Paul Sr. and Gwendolyn (known as Betty) Woodworth. She attended North St. Paul High School, where she met and began dating George Ziebarth during their senior year. After graduation... View Obituary & Service Information

The family of Jo Evelyn Ziebarth created this Life Tributes page to make it easy to share your memories.

Send flowers to the Ziebarth family.