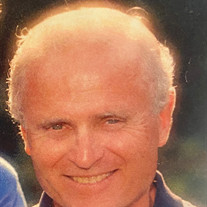 Jerald K. Shaw passed to eternal life on November 16, 2021 after a slow decline following a difficult surgery in July. Jerry was born September 4, 1934 to Kenneth and Pauline Shaw in Mitchell, SD. He died in Wayzata, MN. Jerry was an only child and graduated from Mitchell High School in 1952 - a time and place he would be pleased to tell you all about within the first hour of meeting you. He attended Stanford University then transferred to the University of Nebraska where he joined Sigma Alpha Epsilon Fraternity. On August 25, 1956, Jerry married Joanne, his high school sweetheart, after which they enrolled at Indiana University where he earned his MBA. His career took the family to Chicago; Bettendorf, IA; and finally Minnetonka, MN. Jerry was drawn to Minneapolis because of trips with his father to watch golf tournaments. When the time was right he searched out job opportunities and found the perfect fit at a young Minnesota based company, Flo-Tronics, where he developed lifelong friendships. Later he worked for M.J. Long Company and Inland Construction before opening his own successful accounting practice from home with Joanne. After selling the business in 1983, Jerry went to work as CFO of a company owned by one of his clients until retiring in 1992. Jerry never met a person he didn't like; he made friends quickly and easily. He seemed to retain details about everything, especially the sports world. He rarely forgot a name or a face. His great love was his family. His passions included listening to music (especially live), watching and playing sports, golfing, and downhill skiing. Many treasured family memories were created on ski and golf vacations. Growing up in a small town gave him many opportunities. As a young man, he joined pheasant hunts with his father, uncle, and their friends. Athletically, he was a late bloomer, but by the end of high school he helped lead his basketball and baseball teams (as a pitcher) to state tournaments. His Junior Legion baseball team even won a state championship! Later, his stellar pitching helped him make the University of Nebraska baseball team. He represented his high school in the state tennis tournament doubles category. Jerry's passion for golf and a deep bond with his father were formed during many (many!) rounds on the golf course. They often had long distance, pay-by-the-minute phone calls detailing their recent games. Golf leagues appealed to him and early on he joined several that played after working hours. Most Saturdays were spent at Island View Golf Club where he worked on improving his score. For many years there were winter trips to Walden Golf Club in Texas. Winter vacations also found him on ski slopes often with family or friends. Jerry was delighted to introduce all sports to his children and grandchildren. He also loved waterskiing with friends on Lake Minnetonka. Travel adventures included road trips to Civil War battlefields due to his deep interest in the subject as well as his goal of visiting all fifty states, and trips to Dominican Republic, Canada, Mexico, and a cruise through the Panama Canal. Unfortunately, a 2010 stroke that affected his left hand abruptly ended any athletic endeavors. Never one to complain about his misfortune, most people never realized his limitation. To simplify their lives, in 2013 Jerry and Joanne moved to Folkestone Presbyterian Homes in Wayzata, MN. He loved everything about this decision. Jerry is survived by his wife, Joanne (Test), of 65 years. Two daughters, Lorri (Doug) Mathers in Rochester, MN, Julie (Kent) Forss in Excelsior, MN. Grandchildren are Jeremy Mathers, Stephanie (Forss) Iskierka, Molly Mathers, Mitchell Forss, Angela Forss, and two great-grandchildren. All will miss the many quirky and unique "Jerry-isms" in the years to come. There will be a celebration of life service held at Folkestone in Wayzata on December 29th at 2:00 pm with visitation 1 hour prior. (Subject to change depending on Covid rules.) A family graveside service has taken place in Mitchell, SD. In lieu of flowers, memorials preferred to Folkestone Foundation, 100 Promenade Ave, Wayzata, MN 55391 or a charity of the donor's choice. Arrangements through: Washburn-McReavy Eden Prairie Chapel

Jerald K. Shaw passed to eternal life on November 16, 2021 after a slow decline following a difficult surgery in July. Jerry was born September 4, 1934 to Kenneth and Pauline Shaw in Mitchell, SD. He died in Wayzata, MN. Jerry was an only... View Obituary & Service Information

The family of Jerald Kenneth Shaw created this Life Tributes page to make it easy to share your memories.

Send flowers to the Shaw family.