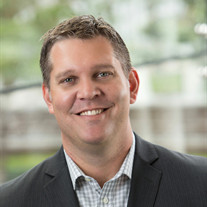 Jeffrey "Jeff" Stevens, age 47, died peacefully on September 20 surrounded by his family after a courageous battle against cancer. He is loved, admired and respected by many and will be truly missed by all that knew him. Jeff was born on May 6, 1974 in Minot, North Dakota to Michael and Connie Stevens. He graduated from Fargo South High School where he was a standout athlete. Jeff was a North Dakota Mr. Basketball finalist and key member of the baseball team that competed in the 1992 American Legion World Series. He began college at North Dakota State University and went on to become a two-time All-American basketball player for Black Hills State University (BHSU). He was inducted into the Hall of Fame for both BHSU and the South Dakota Intercollegiate Conference. Jeff brought the same sense of teamwork to his career in the financial services industry. After joining BlackRock in 2010, he helped the global investment firm achieve record results in the D.C. market and in 2017 became National Sales Manager. Jeff always made time for others. He cared deeply about the people he worked with and had the ability to genuinely connect with anyone. He nudged and coached colleagues through challenges and took pride in their successes. Jeff's greatest pride was his family, as husband to Erica and father to Maia (15), Michael (13) and Maren (9). He absolutely loved spending time with his kids, bringing his warmth, humor and encouragement to his role as a parent. One of his greatest joys was to coach his own kids and cheer on others. His love of the game fueled his contributions to the development of a youth basketball program where he coached girls' and boys' teams of all ages and mentored players. One of the many special and admirable things about Jeff is that he was always fully himself. That simple, likeable authenticity showed up in so many ways - as a fan of Weird Al Yankovic and an ever bigger fan of bacon. As someone who loved to swap stories over Miller Lites. As a road warrior who never got tired of cashing in hotel points or using fax machines. As a quick wit and charming goofball. The outpouring of love and support over the past year is testament to how Jeff inspired warmth and friendship among so many people throughout his life. Jeff is survived by his wife Erica (Solberg); children Maia, Michael, and Maren; mother Connie Ford (Marc); mother- and father-in-law, Larry and Shirley Solberg; brother Jason Stevens (Kristi); sister Kelly Buffington (Mark); brother-in-law Sean Solberg (Monica); and numerous aunts, uncles, cousins, nieces, and nephews. He was preceded in death by his father and his grandparents. A memorial service will be held at 12pm on Thursday, Sept. 30 at Mt. Olivet Lutheran Church (5025 Knox Ave S., Minneapolis) with a visitation beginning at 11am. Memorials in honor of Jeff can be sent to The Family of Jeff Stevens Benefit Fund, Bell Bank, 5050 13th Ave SW, Fargo, ND 58103 to benefit Maia, Michael and Maren. Memorials may also be sent to the Jeff Stevens Memorial Scholarship Fund for the Minneapolis Lakers Youth Traveling Basketball Association at https://www.mplslakers.org/jeffstevens.

Jeffrey "Jeff" Stevens, age 47, died peacefully on September 20 surrounded by his family after a courageous battle against cancer. He is loved, admired and respected by many and will be truly missed by all that knew him. Jeff was born on... View Obituary & Service Information

The family of Jeffrey Scott Stevens created this Life Tributes page to make it easy to share your memories.

Send flowers to the Stevens family.