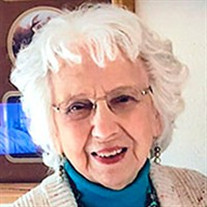 Anderson, Jean Elizabeth age 97, of Crystal, born Aug. 4, 1924, went to be with the Lord on Jan. 23, 2022. Jean was a loving, dedicated and creative wife, mother of four, grandmother of five, and great-grandmother of nine, who will be extremely missed by her family and friends. She married Carl G. Anderson on Feb. 1, 1947. Their union lasted for 64 years. Carl would call Jean, affectionately, "Curly" throughout their time together. Jean was a devout Christian who loved the Lord. She made sure her children were raised in the church and her strong faith helped her through the death of her first daughter, Linda, age 5, from cancer. She was a homemaker raising her children until they were all in school. At that time she started to work as a cook at Plymouth Junior High in Plymouth, MN. Carl and she acquired a cabin on Crow Wing Lake, south of Brainerd, MN, in 1957. Hence began a wonderful 60+ years of fun with family and friends. Jean was a consummate host, known for her famous homemade sloppy joes! When not entertaining, you could find her outside raking leaves, picking up sticks and tending to her flowers. She lived in Robbinsdale on Major Ave. with Carl when they first married, then moved to Crystal on Jersey Circle for 60 years. Her last few years were spent at Cherrywood Pointe in Plymouth. Jean will be remembered for her kind heart, giving soul and positive attitude. She enjoyed being creative with her needlepoint work and made sure her children each had a sample of it for their homes. Preceded in death by husband, Carl; daughter, Linda; along with her parents, Paul and Esther LaRue; sisters, Gladys, Marian and her brother, Paul. She is survived by her three children, Steve (Wendie), Terry (Jack Katzenberger), and Brent; along with five grandchildren, Dan and Joe Anderson, Tanya Dolan, Cassie Beckfeld, and Jordan Anderson; her many great-grandchildren, Katlyn, Nicholas, Addy, Evan, and Emily Anderson, Garrett, Teagan and Charlotte Dolan, and Elijah Beckfeld; step- grandchildren, Chad and Jake Katzenberger; and step-great-grandchildren, Mia, Ava, Samantha and Skyler Katzenberger. Memorials preferred to Parkers Lake Baptist Church or Riverside Union Church. Private interment Ft. Snelling National Cemetery. Funeral service Tuesday, 2/1/22, 11 am with visitation 1 hour prior to service, at: Washburn-McReavy.com Glen Haven Chapel 763-533-8643 5125 W. Broadway, Crystal

Anderson, Jean Elizabeth age 97, of Crystal, born Aug. 4, 1924, went to be with the Lord on Jan. 23, 2022. Jean was a loving, dedicated and creative wife, mother of four, grandmother of five, and great-grandmother of nine, who will be extremely... View Obituary & Service Information

The family of Jean Elizabeth Anderson created this Life Tributes page to make it easy to share your memories.