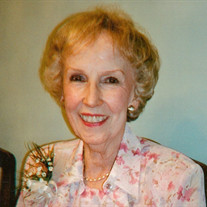 Janeva Kathleen Doornbos Grist April 18, 1926-May 27, 2022 Janeva Kathleen Doornbos Grist was born in El Dorado, Kansas April 18, 1926. She was the third of four children born to Virgil and Sena Doornbos. She grew up riding a horse to attend a one room schoolhouse called Science Hall. She then attended two years of school in Wichita, and finished her high school education at El Dorado High School. It was while she was attending high school that Janeva met Walter Grist, who was attending Junior College in the same building. After completing Junior College, Walter joined the army to serve in World War II. Janeva, at the age of 18, traveled by train to Pennsylvania where they were married on September 19, 1944 at the Army base chapel, before he shipped out to the Aleutian Islands. After the war, they both went to Friends University to complete their degrees. Janeva was a member and soloist with the Friends University Singing Quakers. They then moved to Dallas, TX where Walter attended seminary. It was in Texas that their first child was born, Kathleen Annise. During Walter's church ministry, they lived in Natoma, KS where Minda Laurene was born; Washington, KS where Randall Jeffrey was born; and finally Wichita, KS. At all the churches, Janeva was singing in or directing choirs, leading Bible Studies, helping with children's ministry, and reaching out to people in need. In 1968 the family moved to Baltimore, MD where Walter directed the Koinonia retreat center. In 1970 they moved to Minneapolis, MN where Walter served with the Billy Graham Evangelistic Association until his retirement. Janeva traveled with him for three assignments, living several months in India, Brazil, and Hungary. In all of those places, Janeva was involved in the ministry, often singing at large meetings. She touched many people and members of her family with her strong Christian faith and relationship with Jesus. After her love for Jesus, Janeva's greatest love was for her children and grandchildren. She was a devoted mother and grandmother, demonstrating her love by spending as much time as possible with her family. Janeva was an accomplished vocalist and played the piano by ear with her own arrangements of many songs. Janeva was an avid flower gardener. In two different years Janeva won the award for the most beautiful yard in Robbinsdale, MN. All three of her children have followed in her footsteps as musicians and gardeners. Janeva's faith, love for family, caring for those in need, love of nature, and sharing her music have influenced all of her family and many people wherever she went. It can truly be said of her, "Well done, good and faithful servant!" Janeva is survived by her children: Kathleen (Benedict) Schwartz of Zambia, Minda (Joel) Squadroni of Buffalo, and Randall Grist of Brooklyn Center, 9 grandchildren, 20 great grandchildren, and 1 great-great grandson. Janeva's funeral service is June 3, at Zion Lutheran Church, 1200 highway 25 S., Buffalo, MN. Visitation is at 10 and the funeral service at 11. Lunch will be served at the church following the service. Interment at Glen Haven Memorial Gardens, 5125 West Broadway in Crystal MN. Live stream: https://youtu.be/zNnhh3bXdEw In lieu of flowers, memorials are designated for: "All Kids Can Learn International", 224 N. Washington St., Havre de Grace, MD 21078 Email: [email protected] Web: www.akcli-voh.org Or North United Methodist Church, 4350 Fremont Ave. N., Minneapolis, MN 55412

The family of Janeva Kathleen Grist created this Life Tributes page to make it easy to share your memories.

Send flowers to the Grist family.