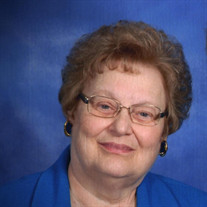 Hipple, Janet Louise Age 76, passed away Thursday, November 18, 2021. Janet was born to Rudolf Milbrandt and Marjorie (Rein) Milbrandt on January 6, 1945, in Ortonville, Minnesota. Janet graduated from Ortonville High School in 1963. Following graduation, Janet was employed as a secretary for James Knoll Elementary School in Ortonville. On October 11, 1963, she married her beau, Harold LeRoy Hipple, at the First United Methodist Church, where they had met. They farmed with Harold's parents before taking over the farm operation one year later. Janet later became the administrative assistant for the U of M Extension Service in Ortonville where she worked until she retired. Janet was a good and faithful Christian, loved Bible Study, and served as organist for her church for over 40 years, playing for nearly three thousand church services, weddings, and funerals. She loved to garden, took great pride in her vegetable patches, and became a Master Gardener. Janet was a 4-H adult leader during and after the many years her own children were 4-H'ers. She loved reading to her granddaughters. In November 2010, Harold and Janet sold the family farm and moved to Bloomington, Minnesota to be closer to their children. Janet is survived by her three children, Jennifer Hipple of Bloomington, Karen Hipple-Perez of Eden Prairie, and Harry (Crystal) Hipple of Buffalo; grandchildren Alexa and Evelyn; brother, Rudy Milbrandt; and brother-in-law, Dick Hipple, along with many cousins, nieces, and nephews. Janet was preceded in death by her husband, Harold; her parents; parents-in-law, Ralph and Fern Hipple; sisters, Marilynn Mielitz and Rosemary Pinkert; brothers-in-law Donald Hipple and Donald Mielitz; and sister-in-law Carol Hipple. Funeral services will be held at Normandale Hylands United Methodist Church in Bloomington, on Tuesday, November 23 at 2 PM with visitation at 1 PM. A Celebration of Life will take place at the First United Methodist Church in Ortonville, Minnesota on Wednesday, November 24 at 2 PM with burial at Mound Cemetery in Ortonville. Gifts in memory of Janet L. Hipple are requested to Second Harvest Heartland or the Big Stone Lake Area Emergency Food Shelf.

The family of Janet Louise Hipple created this Life Tributes page to make it easy to share your memories.

Send flowers to the Hipple family.