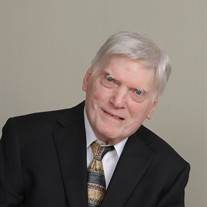 Roberts, James Bernard "Jim" Age 91, of Bloomington, MN. Born January 10, 1931, in Mpls, MN to George and Agnes (Bickett) Roberts, passed away peacefully on March 20, 2022, surrounded by his family. He served honorably in the US Army during... View Obituary & Service Information

The family of James Bernard Roberts created this Life Tributes page to make it easy to share your memories.

Send flowers to the Roberts family.