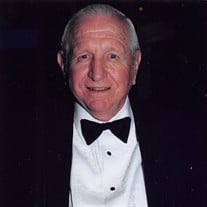 James Arthur "Jim" Blood of Golden Valley, MN passed away peacefully on May 24, 2022, at age 89. He is preceded in death by his parents, Esther and James McKaig Blood; sister, Lois Duffield. Survived by wife, Donna; four children, Lora (Joe), David, Charlene (Mark) and Jim (Kalee); 9 grandchildren and 2 great grandchildren. A Joliet, IL native, Jim attended A.O. Marshall Grade School where, at age 9, he began his love affair with the baritone. He played in the Joliet Township HS bands, both as a high school and junior college student. His studies would take him to the U of IL where he played in the concert and marching bands, as well as the American Legion Band, Joliet Post, during summer breaks. Jim graduated college in 1955 with a BA in Electrical Engineering. While attending college, Jim met Donna Frojd, also of Joliet, and were married upon graduation. They moved to Mishawaka, Indiana where Jim worked for Bendix Corp until a move in 1964 took the family to Mpls MN; his retirement in 1990. Jim's love of music would be the connecting thread throughout his life - Jim and Donna first meeting at a Luther League choir rehearsal at Bethlehem Lutheran, Joliet. While the couple together sang in many choirs, it was through his horn playing that Jim's life was given purpose. Striking up a march for a pre-k class, or accompanying a sing-a-long on a stroke recovery ward were a few of his solo performances. As an ensemble member, Jim found fellowship in creating something special that was much bigger than the individual parts. At the time of his death, Jim was on the rosters of the Minnesota Symphonic Winds, Lake Wobegon Brass Band, Senior ELCA Synod Band, Fridley City Band, and Robbinsdale City Band. Jim encouraged all to sing or play an instrument, especially his kids and grandkids. Playing together at a family gathering or a community event such as Tuba Christmas was a joy, and sharing a mutual appreciation of a Doc Severinsen concert or Drum Beauty competition was a delight. The celebration honoring Jim is set for Wednesday, Jun 1, 11 am at Calvary Lutheran of Golden Valley MN with visitation from 10-11 am and lunch reception; the service viewable live at events.calvary.org. In lieu of flowers, suggested donations to the Lake Wobegon Brass Band lwbb.org, MN Symphonic Winds mswind.org or your favorite band. Washburn-McReavy.com Hillside Chapel 612-781-1999 In lieu of flowers, suggested donations to the Lake Wobegon Brass Band lwbb.org, MN Symphonic Winds mswind.org or your favorite band.

The family of James Arthur Blood created this Life Tributes page to make it easy to share your memories.

Send flowers to the Blood family.