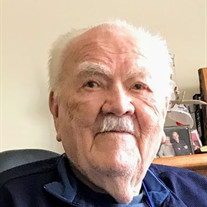 Iver J. Anderson, Age 99 passed away peacefully on September 13, 2021, at Presbyterian Homes of Bloomington. Iver was born on September 9, 1922, in Kansas City MO to Anna and Gunnar Anderson. He graduated from Central High School in Kansas City MO. Shortly after graduation, he enlisted in the Coast Guard and served in the Shore Patrol in South Carolina, a later assignment was in Washington DC as courier for the Coast Guard Commandant during World War II. In 1946, he met his future wife, Elaine Pinks in Washington DC, where Elaine served in the US Navy. Both were discharged and then married in Minneapolis MN in August 1946. Iver served in the Navy reserve after WWII and was called to service during the Korean Conflict and was deployed in the South Pacific. They had 3 children in Kansas City before moving to Bloomington MN in 1958. Their 4th child was born in Bloomington where they lived for the rest of their lives. He was a charter member of St. Stephen Lutheran Church, Bloomington MN. He served on many committees and was a long standing member of the church choir. Iver worked for the Santa Fe railroad in Kansas City MO. After moving to Bloomington, he worked as a carpet professional selling carpet and later selling carpet cleaning services. He retired after working at the IDS Center as the building superintendent. After retiring, he spent many years as a woodcarver. Iver was very proud of his Swedish heritage. He taught Swedish woodcarving at the American Swedish Institute in Minneapolis. He was a tenor in the American Swedish Institute Male Chorus. Iver was preceded in death by his parents, his wife Elaine, a daughter-in-law Robin, his sister Doris, her husband Osmund Nygaard, brother-in-law David Pinks and 2 nephews. He is survived by his children, Louise (David) Nichols; Gary (Jan) Anderson; David Anderson and Linnea (JC) Chrest. Grandchildren Heather (Xavier) DeAnda, Christopher (Mora) Nichols, Jennifer (Yong Ho) Park, Jesse (Ketti Kobberman) Anderson, Shane (Revae Lindsey) Anderson, Jason Anderson, Elaine Anderson, Dan (Laura) Chrest, and Jeffrey (Lindsay) Chrest. Twelve great grandchildren, many nieces, nephews, and cousins in the U.S. and Sweden. Interment is scheduled at Fort Snelling National Cemetery on November 12, 2021, at 9:45 a.m. followed by a celebration of life at St. Stephen Lutheran Church 8400 France Ave S. at 11 a.m. In lieu of flowers, memorials may be given to your favorite charity.

The family of Iver Julius Anderson created this Life Tributes page to make it easy to share your memories.