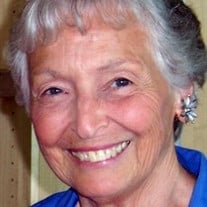 Ida "Eda" Jacobson, age 93, of Eden Prairie, MN (formerly of Middleton, WI), passed away, March 14, 2022 at Flagstone Care Center in Eden Prairie. After a debilitating stroke on February 14th, she slowly slipped away until her Heavenly Father called her home. The staff at Flagstone, and Optage Hospice, lovingly cared for her, and many of them were moved by her exceptionally peaceful home-going. Several commented that they wanted to be as sure of their eternal home in Heaven, as she was. Eda was born on September 6, 1928, in Milwaukee, Wisconsin, the sixth of seven children, to Salvatore and Elvira (Lo'Cicero) Manera, both first generation immigrants from Sicily. She graduated from Riverside High School in 1947 and married the love of her life, Robert (Bob) Jacobson, on June 5, 1948. Eda was a loving and devoted wife to Bob for 65 years. Eda spent her life lovingly supporting her husband, Bob - always as a dedicated homemaker, initially the wife of a builder, and later in their lives, as a Pastor's wife. As Bob said of Eda on the occasion of their 50th anniversary celebration, "her desire in life was to be a homemaker and mother, and she excelled in both. Thanks to her commitment to God, her family, and her husband, wherever she lived, (and she surely did have adventures in moving, having moved via U-Haul about 30 times, some cross-country), she turned each of these moves into a home that was delightful to come home to...from the flowers that were always planted, to the clean house, and to the meals that were always on time." Eda was a talented, self-taught, artist, with numerous paintings to her credit. Her paintings included traditional floral arrangements and legacy homesteads on canvas, life-size Christmas cards painted on 4' x 8' plywood sheets, four legacy saws, and even a couple of garage doors! Whatever memory a person wanted to preserve, she would do her best to paint it for them. She was also known for her warm hospitality, and was quick to invite family and friends to her home for a meal and fellowship. If possible, those times would include some sort of table game. She was a strong competitor, and loved to play games, challenging herself to improve each time she played. But she also enjoyed how group games and ice-breakers brought people closer to each other. Game playing was a regular activity when she and her three sisters got together, and whenever a game of Bingo was being played you could always count on her to be there. Eda was also a woman of deep faith. She trusted her Lord for His provision, guidance, wisdom, and comfort throughout her life, and she loved being involved in church ministry. No matter what church she attended, she got involved. Over the years she served her church families in many capacities. These ministries included, Sunday School teacher, VBS leader, Women's Ministry leader, Stephen's Ministry caregiver, Seniors Group leadership (Sams), and anywhere else she was needed. She also loved to sing and she served in many musical groups. These included singing in the choir, singing duets with Bob, choir director, being a member of many singing ensembles over the years, and most recently leading a bi-monthly hymn sing at the Jefferson, in Middleton. Her children got their first exposure to group singing on their long car trips between Wisconsin and Florida, in the early 1960's, and have all been singing ever since. Eda will be greatly missed by everyone who loved her, but we are confident that she is finally home, reunited with Bob, and worshipping at the feet of her Lord and Savior, Jesus Christ. She is survived by her children; Dr. Donald (Cathy) Jacobson; Richard (Susan) Jacobson; Judy (Richard) Burton; Pastor Michael (Angie) Jacobson; 13 grandchildren and their spouses; 27 great-grandchildren; her sister, Marie Matthews; many dear nieces and nephews; and many wonderful friends. She was preceded in death by her beloved husband, Bob; her mother and father; her sisters, Rose Emanuele and Zina Lillard; and brothers Louis, Ned, and Joe Manera. A celebration of Eda's life will be held at New Hope Evangelical Free Church, 639 South 8th Street, Mt. Horeb, WI, on Saturday, June, 25 at 11:00 AM. Her son, Pastor Michael Jacobson, will be officiating. A light lunch will follow. The family wishes memorial contributions be made to Presbyterian Homes Foundation, 2845 Hamline Ave. N., Roseville, MN 55113 or online at www.preshomes.org - Under "Make a Gift Today" / PHS Community - indicate either Optage Hospice or Flagstone Care Center / Tribute Gift

The family of Ida Jacobson created this Life Tributes page to make it easy to share your memories.