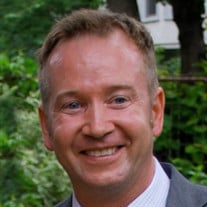 Fraser "El Capitan" MacDonald July 25, 1971 - November 9, 2021 Fraser MacDonald was known by many names to many people - Captain, El Capitan, Cap, Fraz, DJ Kool E Kool, Vanilla Ice... These many monikers were just some of the myriad ways his Mötley Crüe of friends expressed their love and affection for Fraser, who lost a brief but bravely fought battle with cancer on November 9 in Minneapolis, Minnesota, at the age of 50. Fraser grew up on the not-so-mean streets of Parkwood Hills in the leafy, metal-head strewn suburbs of Ottawa, Canada. He distinguished himself early on by solving the Rubik's Cube before any of his Grade 5 classmates at Parkwood Hills Public School. Fraser also served with distinction that year in the elite Fraser-Jason-Adam unit of the so-called Finifickle Army. Friendships forged in the heat of their epic playground battles with the rival She-Devils lasted throughout his life. Just days before he passed, a group of his old Finifickle Army buddies gathered around Fraser and his beloved wife Dao Nguyen for one last round of laughs and stories from those carefree days. Fraser was the first kid in his grade to move up a year in math, a feat that still makes at least one former classmate slightly jealous. Brilliance came naturally to Fraser and maybe that's why he never made a big deal of it. Instead, he paid his good fortune forward, mentoring kids as a "Big" in the Big Brothers and Big Sisters of Canada and using his skills and genius to help others wherever he could - family, friends, and strangers alike. Young at heart, Fraser loved making kids (and all of us) laugh and his career in the toy industry seemed a perfect fit. After attending Queen's University in Kingston, where he excelled in Commerce, social engineering (the good kind) and impressively elaborate pranks, The Captain ended up at the Manhattan Toy Company in Minneapolis. There he met Dao, a product designer who fell for his razor-blade wit, self-deprecating charm and good looks modelled on his hero, Andre Agassi (minus the mullet, thankfully). Upon meeting, Dao ribbed Fraser for being Canadian, and, knowing Fraser, he likely returned with a deft, Agassi-like corner shot at her being from Minnesota. It was game on, and the two lovebirds later married on Fraser's birthday in 2014. Fraser leaves Dao, his Mom Lee Matthewson-Browning (Keith Browning), his brother Tyler, sisters Kimberly and Jennilee, his much-loved nieces and nephews, his innumerable friends from his days in Ottawa, Kingston, Victoria, San Diego, Edmonton and Minneapolis, and all their kids whose progress he quietly, lovingly followed from afar. Rest in peace, Oh Captain, My Captain. A celebration of Fraser's life will be held December 4, 2021, in Minneapolis at The Annex, 2744 Lyndale Avenue South, from 3 p.m. to 7 p.m., with speakers sharing their favourite Fraser stories between 4 p.m. and 5 p.m. In lieu of flowers, donations to the American Cancer Society in Fraser's name would be most welcome. Saturday, December 4, 2021 03:30 PM CST JOIN THE CELEBRATION For those unfamiliar with Zoom, you should be able to click on the link provided below to join the celebration. If you are using a mobile device, you may need to download the Zoom app, but no registration or fees are required. You will need to provide a screen name. CELEBRATION SCHEDULE 3:30-4:00 CST Join in early to see a video montage of photos and clips of Fraser's life. During this time feel free to share any comments via the chat feature. A designated speaker will share them with Dao and the rest of the attendees. 4:00-5:00 CST Live stream of attendees‘ stories and memories of Fraser. Keep the comments coming during this time! 5:00-5:30 CST Replay of video montage and sign-off. https://us02web.zoom.us/j/82113163786?pwd=Q1dHTDBsQndvK2FMTFBGNDExc3VTZz09 Meeting ID: 821 1316 3786 Passcode: 938371

The family of Ian Fraser MacDonald created this Life Tributes page to make it easy to share your memories.

Send flowers to the MacDonald family.