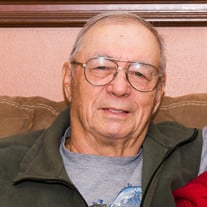 Harold John Peterson Jr., known as "Pete", age 83, passed away May 1, 2022, from complications of cardiac surgery. Pete was born on January 31, 1939, in Northville, MI. He was the only child of Harold and Helen Peterson. He is preceded in death by his parents. He is survived by his loving wife, Ramona Tuisku Peterson; daughters Anna Hansen and Krista (Randy) Miller; grandchildren Ashley (Dan) Stoeberl, Cole (Ashley) Hansen, and Alex Miller; great-grandchildren Peter and Erik Stoeberl and Hannah Hansen; brother-in-law Richard Tuisku (Judy Brewer); sisters-in-law, Sheila Buswell and Brenda Dorvinen; cousins, nieces, and nephews. Pete graduated from Lake Linden High School in 1956. He attended Michigan Technical University for two years and afterward served in the US Army. Pete and Ramona were married on August 27, 1960, in Atlantic Mine, MI. They moved to Minneapolis, MN, and raised their daughters in Coon Rapids. They spent forty-one years in MN. Pete worked in the fields of metallurgy, industrial chemical analysis, naval defense electrical assembly, and public transportation. Pete was an avid fisherman, hunter, reader, and musician. In his teen years, Pete learned to play the guitar. While serving in the Army in CO, country music grabbed a hold of him. He performed in his own Country & Western bands for nearly 50 years in MN and MI and volunteered his musical talents. His long-running band was "Pete and the Panhandlers". He was lead guitarist and singer and was committed to entertaining a crowd. He continued to play gigs, jams, and recorded his music. Pete sang and played guitar daily which will be greatly missed! In 2001 Pete and Ramona retired to the UP in Jacobsville, MI, at Pete's childhood farm home where Pete enjoyed hunting, fishing in Lake Superior, and playing music. They had twenty great years there. In the summer of 2021, they moved back to MN to be near family. Pete and Mona wintered in TX for a few years and Pete enjoyed the warmth, playing his country music and fishing in the ocean. Pete was a union steward during his working years and was a member of the American Legion for many years. He was a Worthy Past President of the Eagles Aerie 1122 of South Range, MI, and served as President of the Jacobsville Cemetery Association. Over the years Pete had many cars, trucks, boats, motors, trailers, hats, and guitars and was great at bartering and trading equipment. He played hockey and softball and enjoyed sports and history. He was a lover of animals and befriended anyone's dogs or cats as his "buddies". Growing up he always had pets and as an adult had two beloved dogs, Tippy and Candy. He was often outdoors feeding the deer and his birds. Pete had a big heart and enjoyed lending a hand to friends, neighbors, and family. Pete was a real jokester, an entertainer and was always on the go! He would drive any distance for family, friends, or a music job. He had a silly sense of humor and had the gift of gab. He was an ingenious mechanical troubleshooter, always tinkering with something, and highly creative. His genuine and unique personality will never be forgotten. Memorial Service is Thursday, May 12th, at Washburn McReavy Funeral Home in Coon Rapids at 10:00am visitation, 11:00am service, luncheon to follow at VFW next door. In lieu of flowers, memorial donations can be made to the American Heart Association, The Humane Society, or any other charity of your choosing. A Celebration of Life and Burial will be held in Jacobsville, MI on July 6th. More details to follow.

Harold John Peterson Jr., known as "Pete", age 83, passed away May 1, 2022, from complications of cardiac surgery. Pete was born on January 31, 1939, in Northville, MI. He was the only child of Harold and Helen Peterson. He is preceded in death... View Obituary & Service Information

The family of Harold "Pete" Peterson created this Life Tributes page to make it easy to share your memories.