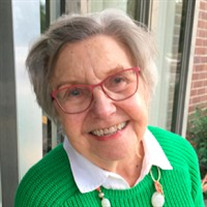 Bofferding, Gloria M. Age 92, of Minnetonka and recently Bloomington, passed away peacefully on October 19, one month shy of her 93rd birthday. Born on a farm near Little Sauk, Minnesota to Syvert and Mary Henningsgaard Johnson, she was the youngest of eight siblings, all of whom predeceased her. She worked for a bank in Sauk Centre, moved to Minneapolis, married Robert Bofferding, and raised two children on the North Side, before moving with her husband to Minnetonka. Following his death in 2010, she took an apartment at Ridge Pointe in Minnetonka, where she formed many friendships. Over the years, she had worked as a bank teller, as a receptionist at Minnesota Dance Theater, and for the Dayton Hudson Foundation. Gloria will be remembered by all who knew her as an accomplished pianist. In her youth, she played at the funeral of Sinclair Lewis, author of Main Street, when his ashes were flown back to Sauk Centre from Rome. She went on to master Rachmaninoff, took pleasure in Cole Porter, and interpreted Debussy with a grace and feeling unknown to amateurs. Her creativity took many other forms: as an adventurous cook who whipped up baked Alaska; as a gardener who knew the name of every plant and flower; and as a conversationalist with keen powers of observation, and a knack for le mot juste. She was a voracious reader of biographies, literature, and poetry. Yet she had no patience for what she didn't like: Bruckner, veal, rubber plants, and the poetry of Tennessee Williams. She was an artist at heart, a free spirit, and a vivid personality, not always easy -- but for those lucky enough to have known her, the world is a less interesting place in her absence. She is survived by her loving daughter Stephanie Jo (Michael) Lindberg of Bloomington; her loving son Louis of New York; grandsons Peter (Stephanie) and Reid Lindberg, and great-grandsons Noel and Beck Lindberg. Many thanks to all those at Friendship Village and Methodist Hospice who cared for Gloria in her final days. Funeral service at Peace Lutheran Church, 8600 East Bush Lake Road, Bloomington, MN on Monday, November 1 at 11:00 a.m., with visitation from 10:00 to 11:00 a.m.Masks required. Private interment at Ft. Snelling National Cemetery.

Bofferding, Gloria M. Age 92, of Minnetonka and recently Bloomington, passed away peacefully on October 19, one month shy of her 93rd birthday. Born on a farm near Little Sauk, Minnesota to Syvert and Mary Henningsgaard Johnson, she was the... View Obituary & Service Information

The family of Gloria Marcella Bofferding created this Life Tributes page to make it easy to share your memories.

Send flowers to the Bofferding family.