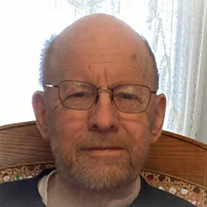 Obituary for Glen Fredrick Busitzky April 28, 1948 - February 24, 2022 Busitzky, Glen F. age 73, of Golden Valley, MN went to be with the Lord on February 24, 2022. Survived by his loving wife of 53 years, Beverly; daughters, Tracey Robinson, Trisha (Jon) Aleckson; grandchildren, Victoria, Ben, Zachary, Belinda, Matthew; sister, Donna (Lon) Schoor; and many other very special family members and friends. Preceded in death by parents, Louis & Emma Busitzky; brothers, Roger Busitzky, Gordon Busitzky, Robert Busitzky, David Busitzky. Glen was born the youngest of six children to Louis & Emma Busitzky on April 28, 1948. He was raised in the Winona area and graduated from Winona Senior High School in 1966. Glen and Bev married on March 8, 1968 in Winona. Glen attended Winona Technical School and graduated in 1969 as a draftsman. He was drafted into the Army in 1969 and served in Germany until 1971. After returning to civilian life in Winona, he was employed at the Winona County Assessment Office as a Property Appraiser. In 1978, Glen & Bev moved to Maple Grove with their daughters and he began a 27 year career with the Hennepin County Assessment Office. He retired in April 2005. Glen enjoyed working on cars, watching car races, going to car shows and working on various home projects. He enjoyed country music and traveled to Nashville and Branson several times with Bev. He served at various churches throughout the years as an usher, trustee, greeter and Boy's Brigade leader. His faith was the center point of his life and he was a member of New Hope Church for 32 years - involved in Men's Bible Studies and Sanctuary Sunday School Class. He was also heavily invested in volunteering at LifeSource after a life-saving liver transplant in 2002. He even participated in the 2003 Minneapolis Transplant Olympics in the Bowling and Bicycling events. Family was extremely important to Glen. He always enjoyed time with each family member and prioritized all events that each have been involved in. He was ready to help friends or family in any needed way. He was tremendously loved and will be deeply missed by all who knew him. A Memorial Service for Glen will be held Friday, March 4, 2022 at 11:00am with visitation one hour prior at New Hope Church 4225 Gettysburg Ave N. New Hope 55428. A luncheon will follow the service. The service will be live-streamed and can be accessed with the link below: https://vimeo.com/682965355/8961eaf9fa.

The family of Glen Fredrick Busitzky created this Life Tributes page to make it easy to share your memories.

Send flowers to the Busitzky family.