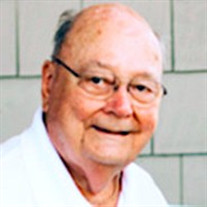 Hable, George R. age 89, passed away peacefully on December 31st, 2021. He is survived by his wife of 65 years, Pearl, son Russell (Michele) Hable, son-in-law Pete (Joan) Bliss, and grandchildren, Krystyne (Chris) Lafean, Shannon (Bob) Vukson, Jared, Emily, and Lauren Bliss. He is also survived by his beloved great- grandchildren, Garrett, Hudson, and Lillian. George was a proud Korean War veteran, and spent more than 30 years working for the City of Minneapolis, retiring as the Director of Treasury. He also served on the Board of Directors for City County Federal Credit Union for 40 years and belonged to a number of fraternal organizations: the Scottish Rite, Shriners International, and the Freemasons. George enjoyed a long retirement, spending time at the cabin at Rush Lake and traveling extensively with friends and family. He is preceded in death by his parents, Leo and Edna Hable, daughter Susan Bliss, and grandson Nicholas Hable. A celebration of life will occur in the spring of 2022. In lieu of flowers, memorials can be sent to Shriners Hospitals for Children. Washburn-McReavy.com Glen Haven Chapel 763-533-8643

The family of George Russel Hable created this Life Tributes page to make it easy to share your memories.

Send flowers to the Hable family.