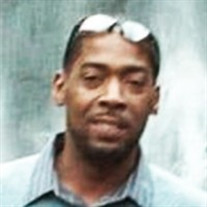 Bickham, George Cornelius aka "Punkin" George was born July 6, 1975, in Minneapolis, MN to George Lee Buckner and Virginia "Carol" Bickham. He is preceded in death by his mother, father, eldest sister Nikita Bickham, and a best friend Lamar Miller. George leaves behind his son, Matthew Nastu, grandmother Bertha Bickham, stepfather Donald Bell I, sisters; Nicole Parker, Dawanna (Jeff) Witt, Kathleen Buckner, Ronele Buckner, and Joye Bel, brother; Donald Bell II, and many nieces, nephews, aunts and uncles, and family members. And his dearest friends since childhood; Eric, Andre, Derrick, Carlos Bronson, Roderick Maddox, and Isaiah Clark. George was a quiet south Minneapolis neighborhood kid ready for any activity that meant getting dirty. He was friendly to all. He loved his family and friends, said it often, and showed it always. When the family relocated to Maple Grove during George's teenage years, he met the mother of his only child, Veronica, and became a treasured member of the Perryman family. George found himself in delighted disbelief when he learned he was having a child. He loved Matthew with everything he had and although young, determined to be present, and he was. Matthew was his pride and joy, George's mini-me, his gift from God to share with all of us and carry on his legacy. George shared how proud he was of Matthew every chance he had. Father and son Chicago Bears fans, that held their ground when reminding family and friends to "Bear Down" despite the heckling (SKOL). Family did not just mean blood relatives to George. His band, Midwest Players Click, with "brothers", Eric, and Derrick, was celebrated on local radio stations such as KMOJ and Twin Cities Live. They enjoyed performing at clubs such as the Riverview Supper Club and Arnellas and their talent bonded them for a lifetime. George was a treasured teammate at Perspectives, where he shared his incomparable teaching and mentoring gifts for over 25 years. Perspectives was not a job for George, it was his way of living love. He was also an ever-present champion for the residents of St. Louis Park. George's legacy embodied inclusiveness, respect, and love. To the countless kids that looked up to him as a role model, mentor, and father figure, know that he cared for each of you very deeply. From our family to yours, thank you for loving him, caring for him, and including him. George Cornelius Bickham was loved by everyone. His life, his legacy will forever be a part of us all! Funeral services will be held on Thursday, February 3, 2022, at New Salem Baptist Church, 2507 N Bryant Ave, Minneapolis, MN. Viewing at 10 am. Funeral at 11 am. Burial at 1 pm at Glen Haven Funeral Chapel and Memorial Gardens.

The family of Mr. George Cornelius Bickham created this Life Tributes page to make it easy to share your memories.

Send flowers to the Bickham family.