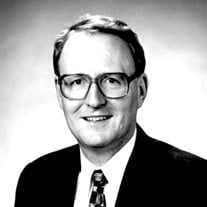 Gary Lybeck, age 73, died Saturday, April 16th while resting peacefully at Fairview Southdale hospital in Edina, MN. A funeral mass will be celebrated at 10:30 AM on Monday, May 2nd at Pax Christi church in Eden Prairie, MN, followed by a ceremony at Fort Snelling on May 3rd. Gary was born in Minot, North Dakota on January 23rd, 1949, the son of Carl and Mary (Miller) Lybeck and younger brother of Bonnie. Gary's father Carl served in World World II and then worked for Minot Federal Savings and Loan (which became Midwest Federal). His family moved to Williston, ND for three years in the 1950's before returning to Minot. Gary graduated from Minot High School in 1967, and attended the University of North Dakota (UND) in Grand Forks. He married Cindy (Hanes) Lybeck on June 13th, 1970 at St. Leo's Catholic Church. Graduating from UND, Gary was commissioned 2nd Lieutenant in the United States Army. Gary and Cindy moved to Fort Gordon, Georgia for training and he was then stationed in Fort Polk, Louisiana. Gary's son Todd was born in Fort Polk in 1973. Later that year Gary was honorably discharged from the army and moved back to Minot, where he worked with father-in-law Cliff at Hanes Insurance. Gary's son Eric was born in Minot in 1975. Gary was a lifetime member and former President of the Sertoma club of Minot, and former President of the Professional Insurance Agents of North Dakota. Gary later purchased the insurance agency, which he owned and operated as Lybeck Insurance. He sold the agency to First Western Bank, where he managed its insurance department, retiring in 2014 and moving to Eden Prairie, Minnesota. Gary loved hunting, watching Sioux hockey, the Minnesota Vikings and Twins, traveling, attending daily mass, and spending time with his three granddaughters. He is survived by his wife Cindy, sister Bonnie (Don) Marpe, sons Todd (Kristina) and Eric, and granddaughters Grace, Alaina and Audrey.

Gary Lybeck, age 73, died Saturday, April 16th while resting peacefully at Fairview Southdale hospital in Edina, MN. A funeral mass will be celebrated at 10:30 AM on Monday, May 2nd at Pax Christi church in Eden Prairie, MN, followed by a ceremony... View Obituary & Service Information

The family of Gary Howard Lybeck created this Life Tributes page to make it easy to share your memories.

Send flowers to the Lybeck family.