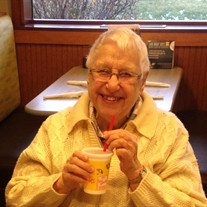 Florence (Flossie) Renea Winquist was born on March 4, 1927 to Alvin & Freida (Andeberg) Winquist in Kiron, Iowa. She was the seventh child of eight children. Alvin's diary on that day read, "Little Florence Renea born at 4:30AM 7 pounds. Shipped hogs this afternoon." These past two plus years she lived at Johanna Shores where on April 24, 2022 she left this earth for her heavenly home. Florence attended a country school where her first-grade teacher taught her two rhymes. "Good better best never let it rest until your good is better and your better best." "If a task is once begun never leave it till it's done. Be that great or small, do it well or not at all." These rhymes followed her around all her life. Florence attended Kiron Baptist Church and through relationships while growing up formed a solid spiritual foundation for her life. After moving to Minneapolis, she was a member Bethlehem Baptist and after moving to St Anthony joined Grace Point Church in New Brighton. Florence had been involved with a weekly Bible study group for years. Graduating high school in 1945 she eventually decided she wanted to be a nurse. She attended Bethel (University) to catch up with her science and chemistry. Working until she completed those courses, she was accepted but then denied entrance into nursing school. With encouragement from her older sister, Eleanora, she applied again to a different school, Fairview School of Nursing and was accepted. She started her three-year learning in February 1950. Graduating with her nursing degree in 1953 she got a job in Med-Surg general nursing. She taught beginning student preliminary procedures and supervised them, was an assistant head nurse and then head nurse. She worked at Fairview after graduating a total of 11 years. Bethel (University) approached her and she began as Director of the Student Health Service. She worked full-time in that position for 24 years. During summers and on call as needed on weekends Florence worked in Intensive Care & Coronary Care at Deaconess Hospital as well. After retiring in 1987 from full-time at Bethel she was invited back to work part-time for another 12 years. Fully retiring from the career of nursing after 49 years and 4 months. Florence loved to travel. While she was working at Bethel, she had the privilege to travel with faculty and students making six trips with the college choir to many countries in Europe and Israel. Along with her brother Bob, his wife & daughter, she traveled to Japan to visit her cousin who was a missionary there. She also made many trips within the U.S. to nearly every state, including Alaska and Hawaii. Her favorite spot however, was the North Shore of Minnesota. Florence volunteered for many years at the Swedish Institute making sandwiches and other treats with her good friend and travel buddy, Ruth Peterson. Daughter, sister, sister-in-law, aunt (great & greater), friend. She was Florence to some and Flossie to others. One family of two nieces and a nephew knew her as Aunt 'Sossy,' Someone couldn't pronounce their F's or L's and the name stuck even referring to herself by that name. Popcorn, corn on the cob, Oreos and crescent rolls were some of the items that were 'treats' when staying or visiting Florence. She loved her family and friends and there was always food when visiting with Florence. Florence was preceded in death by her parents, siblings Ruth Berglund, Waldo (Velma) Winquist, Bob (Ruth) Winquist, Virginia (Eddie) Hunt, Eleanora (Earl) Otto, Virgil (Shirley) Winquist, and Norma (Bob) Dueland. Florence, Flossie, 'Sossy' is survived by her many nieces and nephews, great and greater and by many friends. She may not have married but she loved well and will be missed. In lieu of Flowers a donation may be made to the Florence Winquist Scholarship fund at Bethal Univirsity and please include her name when making the donation on-line or by check. Memorial service to be held Friday, May 20th at 2PM at GracePoint Church, 2351 Rice Creek Rd. New Brighton, MN. Visiting time with family beginning at 1PM. Interment will be at the Kiron Cemetery in Kiron, Iowa on Saturday, May 21st at 3PM. Family and friends are welcome to attend.

The family of Florence (Flossie) Renea Winquist created this Life Tributes page to make it easy to share your memories.