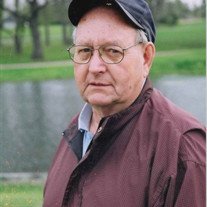 Eugene LeRoy Pulcher Age 86 of Isanti, MN passed away on December 5, 2021. Eugene Leroy Pulcher was born March 31, 1935 to Clarence and Amanda (Block) in Westbrook, MN. Gene was the oldest child of five, his siblings included two sisters, Carolyn and Diane and two brothers, David and Aldon. After High School he enlisted in the Airforce. He served 4 years from 1953 to 1957 with 9 month of active duty in Korea. He was married to Arlene Rholl on August 20th, 1955 while in the service. Gene and Arlene spent 34 Years together and had five children, Deborah, Steven, Jeff, Julie and infant baby boy. In their early years Gene was very involved with the Lutheran Church in Anoka, MN. After the death of Arlene (1989), Gene found comfort in spending time with his bowling partners, on the golf course and with dear friend Roberta. Gene moved around a lot early in life making a home in New Hope, Anoka, Bradford, Cambridge (where he eventually settled in for a while to raise his family), Arden Hills, Coon Rapids, and then settling back to the Cambridge-Isanti area in 2012 where he spent his final 9.5 years. During this time he spent most of his time bowling, golfing, and traveling. The last three years found him not able to enjoy the things he loved to do, so he often spent time at the bowling alley watching his son Jeff bowl, looking forward to his lunches with his daughter and son-in-law Julie and Randy, and wishing he could get back on the golf course. While watching Jeff bowl, he found peace and comfort spending time with Heather Voss, close family friend. When no one else could get him to listen to advice, she always could get through to him and he held a close place in his heart for her. He had many great friends, Kathy, Sarah and April from the bowling center and many others at the Condo Community he was living at. He enjoyed his weekly visits with with all his friends. Eugene Leroy Pulcher is preceded in death by parents, Clarence and Amanda Pulcher; wife, Arlene Pulcher; Baby son; daughter, Deborah; son, Steven; grandson, Xavier; sister, Carolyn; brother, Aldon, and close friend, Roberta. Eugene is survived by his son Jeff, daughter Julie (Randy), Brother David, Sister Diane, Grandchildren Heidi (Todd), Angie (Brent), Brian, Steven (Michelle), Stephanie (Andy), Shannon (Cory), Brandon, Zachery (Jennifer), Nicole and Taz. Along with step-grandchildren Rachelle (Sam), Rebecca, Ryan (Andrea), Russ, Rhiannon (Dylan). He is also survived by 15 Great Grandchildren, 2 Great-Great Grandsons, and many nieces, nephews and friends. After being placed on Hospices on December 3rd he moved back home where he spent his last days with family, passing away the morning of December 5th in the peace and comfort of home. A memorial service will be held Saturday, December 18th at 3PM at Washburn-McReavy Coon Rapids Chapel. Visitation beginning 1 hour prior to the service. Private interment at Crystal Lake Cemetery in Minneapolis.

The family of Eugene LeRoy Pulcher created this Life Tributes page to make it easy to share your memories.

Send flowers to the Pulcher family.