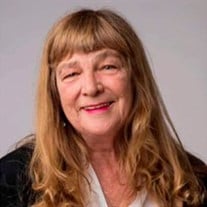 McKiernan, Ethna Maeve An award winning poet devoted to her Irish roots who became a champion for the homeless on the streets of the Twin Cities, died peacefully at home on December 12, 2021 after a lengthy battle with cancer. She was 70 years old. Ethna's interest in Ireland was ignited early in life. When she was seven years old her mother and father, a noted Irish scholar, took their nine children to Dublin to live for a year. Last July, on her final trip to Ireland, Ethna and her adult sons explored County Clare in the west of the country, where her grandmother was born in the late 19th century and where today her brother owns a home. Ethna graduated from the University of Minnesota and later earned an MFA in Poetry from Warren Wilson College. She owned the Minneapolis book distributor Irish Books & Media for three decades, making dozens of trips to Ireland for her work. After closing her business she spent 13 years as a street outreach worker serving the local homeless population. Ethna was the author of five books of poetry. Her latest volume, Light Rolling Slowly Backwards: New and Selected Poems, was published in June by Salmon Poetry of County Clare, Ireland. Like Emily Dickinson, one of her favorite poets, she picked everyday things to marvel at or to grieve over. She "casts a cold eye," as one critic said, "strangely warming us with the chill of truth." Her poetry often reflected her rebellious spirit, as in the hilarious poem about the police detaining her Girl Scout troop of 12-year-olds who had sneaked from their Chicago hotel at midnight wearing "trench coats over nighties." She was a fierce advocate for the poor - a passion that led her to walk down river paths, under bridges and into encampments to deliver services to people without shelter. Ethna was preceded in death by her parents, Eoin and Jeannette McKiernan, and in 2016 by her son Brian Plunkett. She is survived by sons Conor Moe (Julia Mulligan) and Naoise Moe (Nichole Fisher), and by siblings Deirdre (Joseph Hetzler), Kevin (Catherine Boyer), Brendan (Kathy), Nuala (Thomas Rosensteel), Fergus (Ann Schilling), Grania (Nicholas Doyle), Gillisa, and Liadan (William Lorsung). A service of remembrance will be held outdoors in the spring. Donations in her name may be made to Twin Cities Habitat for Humanity, or to People Incorporated Homeless Services by calling Rachel at 651-288-3514, or online at peopleincorporated.org/give-online/

McKiernan, Ethna Maeve An award winning poet devoted to her Irish roots who became a champion for the homeless on the streets of the Twin Cities, died peacefully at home on December 12, 2021 after a lengthy battle with cancer. She was 70 years... View Obituary & Service Information

The family of Ethna Mckiernan created this Life Tributes page to make it easy to share your memories.

Send flowers to the Mckiernan family.