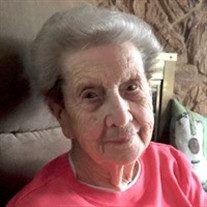 Johnson, Esther Marie March 22, 1922 March 7, 2022 passed away peacefully in Schaumburg, IL, with family by her side. Esther was preceded in death by husband Victor and brothers: Richard, Bernard, Clyde, and Gene. Esther was born in Minneapolis to Edward & Esther Hirt. During WW2 she worked at the Boeing Plant in Seattle, WA, as part of a "Rosie the Riveter" team. She married Victor Paul Johnson on Feb.13, 1946, and raised 3 children: John (Colleen) Johnson, Lois (Jack) Freeman, and Mary Jean (Dane) Del Principe. Esther worked outside the home, holding numerous jobs. The one she enjoyed most was working for the Billy Graham Evangelistic Asso. She enjoyed writing poetry and had many published in the Argus Newspaper. Esther and Victor lived in NE Mpls with their last home in St. Anthony Village until they retired, moving to a home on Lake Latoka in Alexandria, MN, where she spent memorable times fishing with her grandchildren. She took up golfing and was President of the Women's Auxiliary Golf Assoc. at Arrowwood Golf Club. They later moved to Mesa, AZ, where she took up painting. After Victor's passing in 1997, Esther moved to Schaumburg, IL, spending her last 12 years living at her daughter's home. In addition to her 3 children, she is survived by 7 grandchildren: Terri (Dave) Greene, Jason (Jodi) Freeman, Kristen Freeman, Aimee Johnson, Heather Johnson, Megan Johnson and Mike Del Principe, and 4 great-grandchildren: Damien, Samantha, and Emma Freeman and Jada Johnson. While Esther passed just short of her 100th birthday, we will celebrate her on that special day, while she celebrates with Jesus in heaven. Visitation will be at the Washburn-McReavy NE Chapel on Monday, March 14 at 12:30 pm with a short service at 1:30 followed by a private family burial. Washburn-McReavy.com Northeast Chapel 612-781-6828 2901 Johnson St. N.E., Mpls

Johnson, Esther Marie March 22, 1922 March 7, 2022 passed away peacefully in Schaumburg, IL, with family by her side. Esther was preceded in death by husband Victor and brothers: Richard, Bernard, Clyde, and Gene. Esther was born in Minneapolis... View Obituary & Service Information

The family of Esther Marie Johnson created this Life Tributes page to make it easy to share your memories.