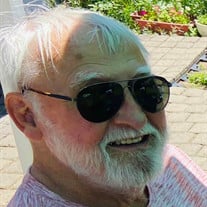 Magdanz, Eric John Our beloved Eric, age 81 and a lifelong resident of South Minneapolis, went to heaven unexpectedly but peacefully on March 26, 2022. He was welcomed by his wife of 44 years, Lyn, his brother Jim, his mother, Emelie, and his grandmother, Bertha, who helped raise him. Eric grew up playing basketball and became a standout player at South High School, from which he graduated in 1959. He had many scholarship offers from across the country but wanted to play for the University of Minnesota because he admired Coach Kundla and so that his mom could come to his games. He played for the Gophers on a full scholarship from 1960-63 and set the single-game scoring record of 42 points on March 5, 1962 against Michigan, which has yet to be broken. He completed his Master of Education degree following his college basketball career and took his first teaching position at South High School, where he taught for the next 17 years, followed by 14 years at Roosevelt High School where he worked as the Athletic Director. He often reflected "When I was teaching, I never worked a day in my life," and he truly loved what he did. He also coached a multitude of sports, including football, basketball, and golf. He would often run into former students in the community and cherished those encounters, even as recently as the night before his passing. After his wife Lyn passed away in 2019, he sold their house of 42 years and moved next door to his daughter, Holly, her husband Peter, and their beagle, Buddha, and they enjoyed many nights together filled with good food and sports on TV. Eric is survived by his sisters, Ginny McClure (Jerry), Katy Phillips (Jim), sister-in-law Donna Magdanz, best friend Dave Berg (Carol) and many loving nieces, nephews, in-laws, former students and friends. He will be missed most by his three children, Lani (Paul) Kranz, Ian, and Holly (Peter Bell) and his two grandchildren, Leif (13) and Lucy (11) who inherited his love for basketball and his kind heart. His other loves included fishing for walleye on Lake Mille Lacs, completing the New York Times crossword puzzle, talking politics, and enjoying happy hour outside in his backyard with family. Eric did not want a funeral with "a bunch of people standing up and talking about me," so in respect for his wishes we are holding an open house style Celebration of Life on Friday, May 6th at the Bloomington Event Center/Knights of Columbus (1114 American Boulevard West, Bloomington, MN 55420) from 4-7 pm for an opportunity to share stories and memories amongst each other. Memorials preferred to the South High Foundation c/o Eric Magdanz Scholarship Fund (3131 19th Avenue South, Minneapolis MN 55407) or www.southhighfoundation.org in dedication to Eric Magdanz. A special thank you to Dan, Jess, Susie and the rest of his Carbone's family for everything over the years. A special thank you as well to Patrick Reusse and Charley Walters for their recent articles which prompted lots of reminiscing after they were published. In Eric's words, "I have had a great life. I had a great childhood, great career, and have great kids and grandkids. If I die tomorrow, I have no regrets."

Magdanz, Eric John Our beloved Eric, age 81 and a lifelong resident of South Minneapolis, went to heaven unexpectedly but peacefully on March 26, 2022. He was welcomed by his wife of 44 years, Lyn, his brother Jim, his mother, Emelie, and his... View Obituary & Service Information

The family of Eric John Magdanz created this Life Tributes page to make it easy to share your memories.

Send flowers to the Magdanz family.