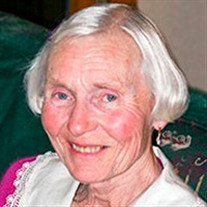 Carlson, Elisabeth Our beloved mother, grandmother and great-grandmother, Elisabeth Carlson, passed away on May 16, 2022 at the age of 89. She is preceded in death by her loving husband of 65 years, Arnold Carlson. She is survived by her three sons and daughter, their spouses, nine grandchildren and two great grandchildren: Allan and Elizabeth Carlson, Laura Carlson, Martine Carlson and Ahmed Gallab ; Ken and Vicki Carlson, Nicole and Jake Carlson; Wayne and Judy Carlson, Erica and Brian Boe, their children Maverick and Liam, Steven and Wendy Carlson; Carol and Jeff Jensen, Cory, Kyle and Caroline Jensen. Elisabeth was born September 22, 1932 in Warsaw, Poland to Michael Solowioff and Wiera Borysow, immigrants to Poland fleeing political oppression. She was an only child with a happy childhood. Her life was turned upside down when Germany invaded Poland during WWII. Like many war children, she was sent to a camp outside of Warsaw for her safety, but separated from her parents who remained in Warsaw. In 1944 communist Russia invaded Warsaw and her parents were killed. Elisabeth then fled by train to Germany. A young German nurse, Margaret Teichert, saved her life as she fell critically ill during these first six months of being a refugee and orphan. She made it safely to Germany and lived the rest of her childhood in the small town of Detmold with a lovely couple who she referred to as Uncle Erich (Hanken) and Aunt Milly. At the age of 18, she crossed the Atlantic and landed in New York City. Through Lutheran Social Services, she came to Minnesota where she met her future husband on the shores of Lake Calhoun in Minneapolis, they married in 1953. She lived in Chicago for a short time and had her first two sons, then came back to Minneapolis and had 2 more children and settled for a long time in Bloomington and then Anoka. She devoted her life to being a mother and raising her four children. Along with being a homemaker, she was an avid gardener of both flowers and vegetables, winning numerous ribbons at local fairs for her roses. Other hobbies included being a seamstress, cook, baker, painter, antiques collector, cross country skier and swimmer. She never had an idle moment. Neither her nor her husband Arnold spent a lot of time in church. She had a faith, but it was shaken because of the traumas of her childhood. It wasn't until her final years, already stricken with dementia, that she began her faith journey again and came to know and love Jesus Christ as her Savior. The same is true of her late husband. They now reside in perfect peace with their Heavenly Father. Elisabeth remained truly kind, sweet and brave into her final days, and although we miss her deeply, our thoughts and memories of her are a blessing. Our family extends our deepest thanks to the staff at The Waters of Edina and Grace Hospice for their tremendous care of our mother. Our family will celebrate Elisabeth's life with a private gathering at Fort Snelling Chapel on July 21. She will be interred with Arnold at Fort Snelling National Cemetery.

Carlson, Elisabeth Our beloved mother, grandmother and great-grandmother, Elisabeth Carlson, passed away on May 16, 2022 at the age of 89. She is preceded in death by her loving husband of 65 years, Arnold Carlson. She is survived by her three... View Obituary & Service Information

The family of Elisabeth Carlson created this Life Tributes page to make it easy to share your memories.

Send flowers to the Carlson family.