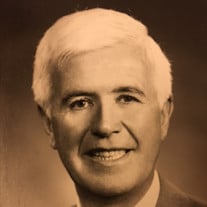 Edward Carl Oliver, former business executive and state legislator, died on June 6, 2022 at the age of 92. A native Minnesotan, Ed was born in St. Paul and educated at the University of Minnesota. He served in Air Force Intelligence during the Korean War and began his business career in New York City, before moving back to the Twin Cities with his wife and young family. For most of his business career, he was an executive at Northwestern Life Management Company, a financial subsidiary of Northwestern National Life Insurance company. He assumed the directorship of the Management Company in 1981 and held that post until he retired in 1990. Throughout his life Ed was very active in state Republican politics, where he was especially concerned about the state's business policies and stance on environmental issues. After retiring from the corporate world, Ed decided to run for public office. He was elected to the State Senate in 1992, where he served for 10 years. Recognized for his ability to collaborate with the other side of the aisle, he was an Assistant Minority Leader from 1997-2003. In his final letter to constituents, he remarked that representing the district had been the most rewarding thing he had done in his long and varied professional life. Ed served on the Great Lakes Commission from 1993-2011, on the Board of the Friends of the Mississippi River, and on the State Arts Board from 2003-2011. Upon retiring from the Senate, he established Oliver Financial and also worked as a mediator for FINRA. In his private life, Ed enjoyed sailing, playing tennis, and traveling with friends and family. Family highlights included ski trips out West, and travels to China and Russia, among other destinations. Ed is survived by his wife of sixty-five years, Charlotte; three sons, Charles, Andrew, and Peter; and two grandchildren, Casimir and Daniella. A public reception will be held at the Washburn-McReavy Edina Chapel on Sunday, June 12 from 10am-12noon, at 5000 West 50th & Highway 100 in Edina, MN. In place of flowers, the family asks that you give a donation to the Friends of the Mississippi River.

Edward Carl Oliver, former business executive and state legislator, died on June 6, 2022 at the age of 92. A native Minnesotan, Ed was born in St. Paul and educated at the University of Minnesota. He served in Air Force Intelligence during... View Obituary & Service Information

The family of Edward Carl Oliver created this Life Tributes page to make it easy to share your memories.

Send flowers to the Oliver family.