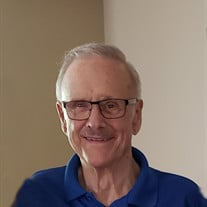 Douglas Rex Ewald passed away peacefully at the age of 84, on October 20, 2021. He was preceded in death by his father, Raymond, mother, Ethel, sisters Barbara, Patricia, and Carol, brothers Graydon and Jerome, and grandchildren Michael McGovern, Dane, Espen and Jeffrey Ewald. Doug is survived by his wife of 63 years Virginia (Eide) and children David (Susan), Carol (Bryan McGovern), William (Roxanne), Tom (Joe Thom), Richard (Polly) and Eric. He is survived by 14 grandchildren and 16 great grandchildren. Doug graduated from North High School in 1955, then pursued his bachelor's degree at his beloved University of Minnesota, followed by his Masters in Hospital Administration, also at the U of M. Doug was the last surviving family member to work in the Ewald Brothers dairy business founded by his grandfather, Chris, in 1886. He worked there from 1960 to 1968 and then served as executive director of the North Central Milk and Ice Cream Association followed by a position at the Minnesota Hospital Association and the Minnesota Association of Homes for the Aging. After that he led the West Suburban Chamber of Commerce and helped coordinate its merger into the TwinWest Chamber of Commerce, one of the largest Chambers of Commerce in the state. In 1973 Doug was elected to the Minnesota House of Representatives and served four terms from 1974 to 1982. After deciding not to run for reelection, Doug founded Ewald Consulting which is now the 8th largest association management company in the country. During this time Doug also served as a member of the Minnesota Ethical Practices Board, chaired the Midwest Society of Association Executives and served on the Southwest Regional Rail Authority. Following retirement, Doug became a Master Gardener and drove the tram at the University of Minnesota Landscape Arboretum. He was also part of the Carver county tree auditing project and with his two compatriots enjoyed referring to themselves as the "tree wisemen." Foremost, Doug loved his family and was noted for the unconditional love he showed each and every member. He loved the many trips to the North Shore he and Ginny took, the Minnesota Twins and Golden Gopher Football. Doug became an avid runner at age 40 and completed 17 marathons in the next 25 years. Doug's family would like to thank Dr. Mark Wilkowske and the staff at the Frauenshuh Cancer Center and the staffs at Augustana Chapel View Care Center and Park Nicollet Hospice for their loving care and attention during Doug's journey. A memorial service and celebration of life will be held at Friday, Nov 5th, 11:00 a.m. at Mount Calvary Lutheran Church, 301 County Rd 19, Excelsior with visitation beginning at 10:00 a.m. Memorials preferred to the University of Minnesota Landscape Arboretum. Washburn-McReavy.com Eden Prairie Chapel 952-975-0400

Douglas Rex Ewald passed away peacefully at the age of 84, on October 20, 2021. He was preceded in death by his father, Raymond, mother, Ethel, sisters Barbara, Patricia, and Carol, brothers Graydon and Jerome, and grandchildren Michael McGovern,... View Obituary & Service Information

The family of Douglas Rex Ewald created this Life Tributes page to make it easy to share your memories.

Douglas Rex Ewald passed away peacefully at the age of 84, on...

Send flowers to the Ewald family.