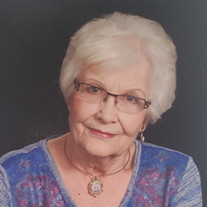 Dorothe Burton went home to her creator early in the morning of December 15, 2021. She was 88. She passed away at Sante of Suprise rehabilitation after a several-week battle with COVID. She has left behind her broken and battered body to be with her lord and savior in heaven. Dorothe was born on April 10, 1933 in Portland, OR and grew up in Minneapolis and rode the streetcar by herself downtown at the tender age of 7. She graduated from Minnehaha Academy in 1951. She was attending classes at the U of M and working at the post office when she met Ralph Burton. In just 90 days after their meeting, they were married on Dec. 24, 1952 which would have had them celebrating their 69th anniversary this year. Everyone who met her loved her. She was always dressed to the nines, but never vain. She could whip up a fabulous meal whether she had a fully stocked kitchen or a nearly bare fridge and was always thinking two meals ahead. Dorothe loved to catch Walleye and cheer on the Vikings. She was a fine artist and could paint almost anything, oils, watercolor, acrylic, china, and glass. Her work of hand-coloring photographs helped her family thrive. She won a blue ribbon at the MN State Fair for her painting titled "Everyone's Friend". Dorothe was part of The Greatest Generation and rightfully so. She lived an exciting and non-typical life traveling around the world as a military wife and later on the mission field in Colombia, South America. She raised 5 children through all of this with the last one arriving only one month before her 25th wedding anniversary. She is survived by her doting husband, Ralph Burton, her sister Pat Stendal, her 5 children, Richard Burton, (Gayle), Dave Burton, (Debbie), Becky Bowman, (Randy), Jon Burton and Betsey McKenzie. Her grandchildren Tim Burton, (Cassie), Nicole Jackson, (Kevin) Briana Bowman and Josh Burton as well as two great-grandchildren Wesley Jackson and Benjamin Burton.

Dorothe Burton went home to her creator early in the morning of December 15, 2021. She was 88. She passed away at Sante of Suprise rehabilitation after a several-week battle with COVID. She has left behind her broken and battered body to be... View Obituary & Service Information

The family of Dorothe Carlson Burton created this Life Tributes page to make it easy to share your memories.

Dorothe Burton went home to her creator early in the morning...

Send flowers to the Burton family.