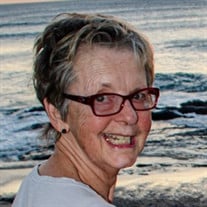 Doris Laurine (Mechaelsen) Peterson passed away on March 18th, 2022, following a heart attack. Doris was born to Leona (Van Langen) and Seafka Mechaelsen in Kamrar, Iowa on May 5th, 1935. Doris first attended Liberty No 9 Country School, a one-room country schoolhouse near their farm, later continuing to Kamrar High School. For a small high school, Kamrar was a powerhouse in girls' basketball. Doris played defense on the 1950 team which ultimately placed runners-up in the state championships. After a year attending Webster City Junior College, Doris moved to Des Moines to attend Drake University, graduating in 1956 with a degree in Education. At Drake she met Corwin (Corky) Peterson on a blind date set up by her roommate. After their marriage in December 1956, Corky brought her to his hometown, the big city of Minneapolis, where she lived for the rest of her life. While she flourished in Minneapolis, Doris never lost the connection to her Iowa roots. Doris taught 1st and 2nd grade throughout the Twin Cities metro before beginning a family. After her own kids were in school full-time, she began teaching again, this time at her beloved Grace Neighborhood Preschool in Minneapolis. The children she taught there provided memories that kept her laughing until the end, while her fellow teachers became life-long friends. Doris felt compelled to create art as far back as she could remember; she drew whenever she had time off from chores, using whatever pencil she could find and whatever piece of paper was available. Thus began a lifetime filled with creating, appreciating, and learning about art, all in time carved out of a busy schedule teaching and raising a family. Proving one person can make a difference, Doris was the spark that ignited the first group of people behind "Save Cedar Lake Park" which eventually grew into the very popular Cedar Lake Trails. The book "Cedar Lake Park Association - A History" is dedicated to Doris. Give a silent thanks to Doris the next time you are walking your dogs or biking along the trails. Doris was happily married to Corky for 64 years until he passed from pulmonary fibrosis in August 2020. Together they travelled the world, recycled at a time when it meant driving the bags to a facility, became vegetarians when it was still considered a bit kooky, and willingly took in every stray animal - of any species - that their kids brought home. Doris was also predeceased by her parents, sister Neva Mechaelsen, brothers and sisters-in-law Howard (Nadine) and Raymond (Coralie). She is survived by son Curt, daughter Sheila and grandson Benjamin, many nieces and nephews. There will be a private graveside ceremony with family members and a joint Celebration of Life for Doris and Corwin on May 21st from 1 to 4 pm at the Women's Club in Minneapolis. Memorials to the Union Gospel Mission https://www.ugmtc.org/get-involved/give and The Humane Society of Minneapolis https://www.animalhumanesociety.org/donate/make-gift www.Washburn-McReavy.com Edina Chapel 952-920-3996

The family of Doris Laurine Peterson created this Life Tributes page to make it easy to share your memories.

Send flowers to the Peterson family.