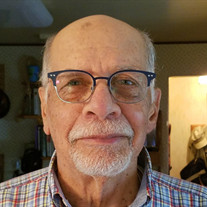 Deacon Donald L. Hamilton was called home on December 23, 2021 in St. Paul, MN. Born January 27, 1935 in Natchez Mississippi, Don joined the Navy and went on to become an electrical engineer, moving from California, to North Dakota and finally to Minnesota in 1980. He worked for Hewlett Packard, the U of M and Cargill. Don had a strong spiritual calling and became an Benadictan Oblate in 1966 at St. Andrew's Abbey in Valyermo, California. Don's spiritual calling continued to grow and he was ordained a permanent Deacon in 1975, part of the very first group to do so. He later moved to North Dakota, working with the first group of Deacons ordained North Dakota in 1979. When the family moved to Minnesota, Don served at St. Rose of Lima (Roseville), St. Odilia (Shoreview) and St. Timothy (Blaine), as well as serving as a champlin with the Boy Scouts and pre-marriage counseling. After 37 years, Don retired in 2012 and continued to serve in any way he could and was an active volunteer with his wife Sue at the VA in Minneapolis. Don met and married his lifelong love Susan 1967. They have five children and eight grandchildren. Don and Sue love the outdoors, they spent many family summer vacations camping and exploring new areas. Once the nest was empty, they enjoyed traveling to Texas as well as long weekends trips. Don loved volunteering, spending time in his garden, fixing what needed fixing, and enjoying time on the patio with Sue or his children when they would stop by for a chat. Don was preceded in death by parents Edward and Lucille, Brothers Edward (Lynn) and John (Madeline). Survived by wife Susan (ne. Barstis), children Dennis (Denise), Laura (Brett), Ed (Jenni), Joe and Mary. Grandkids; Jaelyn, Amelia, Sophie, Zander, Alivia, RIley, Henry and Ben. Four nephews and three nieces.

The family of Donald Louis Hamilton created this Life Tributes page to make it easy to share your memories.

Send flowers to the Hamilton family.