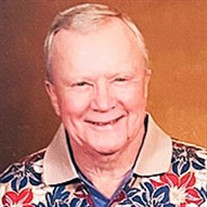 Emry, Dick Lee born 10/14/34 in Ottumwa, Iowa, left his earthly home on 10/22/21 at the age of 87. Dick was predeceased by his parents George and Helen (Carr) Emry, sister Mary Ann Emry and brother John Emry. Dick started his career at age 18 with "Old Ma Bell" and retired from AT&T in 1989 as Division Marketing Sales Manager in Minneapolis, MN. Retirement took Dick and wife, Willie to Arkansas living in both Fairfield Bay and Hot Springs Village. Dick's favorite retirement activities included boating, golfing, and riding his Harley. He found joy in being a Tournament Director for 3 years for PGA tournaments held at Diamante Country Club. He served as a board member at Good Samaritans, was part of the rescue squad, and was involved in Kairo's Prison Ministry. After 27 years of retirement in Arkansas, Dick and Willie moved back to MN to be close to family. He leaves behind his wife Willie Emry of whom he was married for 67 years, along with his 4 children, Rick Emry, Kevin Emry (Vicki), Wendy Stark (Brad), and Matthew Emry. He had 9 grandchildren, Ryan, Sean, Kelly, Justin, Derek, Bailey, Sydney, Taylor, and Katy, and he had 8 great grandchildren. A private Celebration of Life will be held on November 20th, 2021, at 3pm in Blaine, MN.

The family of Dick Lee Emry created this Life Tributes page to make it easy to share your memories.

Send flowers to the Emry family.