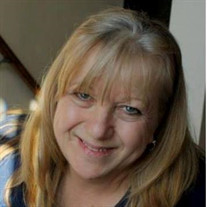 Diane (Woodhull) Manders, age 69, died at home on May 26, 2022, after a long bout with Alzheimer's disease. Diane, or "De" as she was sometimes affectionately known, was born in Superior, Wisconsin on November 5, 1952 and started life in the small village of Poplar. She was the third child of five (Alice, Gerald, Diane, Donald, and Richard) to Orville and Alice Lorraine "Rosie" (Solin) Woodhull. After her father passed, her mother and step-father moved to Hopkins, Minnesota where Diane fell in love and married her high school sweetheart, Jerry Manders. Together they had a daughter, Shannon (Todd) Fox, and three sons: Chad (Pamela), Jake, and Ross (Emily). From there, she had nine grandchildren. She had many interests and jobs along the way, but the one that fulfilled her most was her role as homemaker. Her husband, children, and grandchildren were her complete joy. Diane had many struggles in life; however, her true gift was being able to find beauty in all things. From family to friendship to flowers, Diane could see potential and wonder. She would often tell tales of people's goodness and pick up a leaf to examine its intricacy. She knew that inside all was the ability to be beautiful. She was generous with her love and full of kindness and grace. She had a love of music and art and passed those passions into her children. As Alzheimer's slowly reversed her cognitive ability, she never stopped loving her family and demonstrating her kindness, gentleness, and warmth. Her constant last expression was, "I love you." She was a faithful believer in Christ and has been welcomed into his Kingdom. She will forever be in the hearts of her beloved husband, children, grandchildren, and friends. Memorial service 3 PM Wed, June 8, with gathering one hour prior at: www.Washburn-McReavy.com Glen Haven 763-533-8643 5125 West Broadway, Crystal

Diane (Woodhull) Manders, age 69, died at home on May 26, 2022, after a long bout with Alzheimer's disease. Diane, or "De" as she was sometimes affectionately known, was born in Superior, Wisconsin on November 5, 1952 and started life in... View Obituary & Service Information

The family of Diane Manders created this Life Tributes page to make it easy to share your memories.

Send flowers to the Manders family.