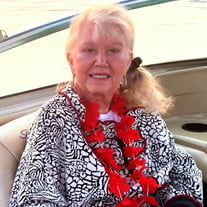 Dr. Diane G. Kramer, PhD Minneapolis - Dr. Diane G. Kramer, a respected leader in nursing education, healthcare administration, and personal development, passed away on April 16, 2022 at the age of 85. In death she leaves her three children, Lisa Adzick, Craig Koller and Michelle Ballard. Diane also leaves behind eight beloved grandchildren and four great grandchildren: from her daughter, Lisa Adzick (George) of Eden Prairie, MN, her sons, Nicholas, Christian and Koller, as well as her stepdaughter Anya Gunn (Greg) and their 4 children, Charlie, Riley, Haldo and Calise; from her son, Craig Koller (Erika Batdorf) of Los Angeles, his three children, Cameron, Riley and Kat; from her daughter, Michelle Ballard of Minneapolis, MN, her two children, Alison and Tuxa. And finally, Diane leaves her brother, William Snyder, and his wife, Donna Snyder, parents of her two nieces, Diane and Elaine. Born in Freeport, IL on May 17, 1936 to Harold T. and Violet S. Snyder, Diane was an excellent student and avid reader from early on who took part in music, dance / majorette and academic activities. Shortly after her graduation from Monroe, WI High School in 1954, she earned her Registered Nurse accreditation from Madison (WI) General Hospital's program and worked to put her young husband, Rev. Robert Koller, through seminary school in Pennsylvania. Together they had three children and returned to serve churches in DePere and Elkhorn, Wisconsin. During the late 1960s she began her steady and consistent ascent at Green Bay's Bellin Hospital, first as a nurse, then a nursing instructor, and finally an assistant hospital administrator and the first Dean of Bellin College of Nursing. While working and raising a family, she added to her RN with a Bachelor's degree from St. Norbert College, and Masters and Doctorate degrees in Educational Administration from the University of Wisconsin, Madison. She played a major part in the Bellin Hospital network's growth initiatives during the 70s and 80s and mobilized her own team to advance from an RN-granting school to a full college offering a Bachelor of Science - Nursing degree, and to also create and publish their own textbook. Her leadership style encouraged input from all people and levels. Her overarching goal was to transcend past perceptions of nursing and healthcare and to welcome greater diversity of thought and leadership among her faculty and students. It was upon her second marriage to Tom Kramer, President and CEO of Deaconess Health System in Evansville, IN, that Diane left Bellin and Green Bay for a new challenge and to serve the larger Evansville community. As a seasoned healthcare leader, she went above and beyond, bringing her experience to bare in consulting and educating the Deaconess staff and medical personnel as they created an active period of expansion and acquisition. Of great interest to Diane was the promotion of Integrative Medicine whereby traditional Western methods of care are complemented with alternative methods such as meditation, chiropractic, yoga, Ayurvedic medicine, massage, healing touch and other modalities to bring about lifestyle changes and greater overall results. Having struggled during her college years with a rare thyroid condition that required a lifelong battle to maintain her health, Diane personally explored many of these methods and empathized with patients who endured persistent health conditions. At the University of Southern Indiana, she co-created the first Integrative Medicine classes, and she was also a Fellow at the first of Kaiser Institute's Integrative Medicine programs in Brighton, CO. She also served as a board member of the Self Awareness Center, a groundbreaking organization with a long history of championing integrative healthcare. At the beginning of the millennium, Diane founded the "Age-ing to Sage-ing" group that explored aging as a metaphysical practice, and she quickly attracted an active community around her. This group has continued to meet for the past 22 years. She also co-founded Mirror Imaging Consulting, a company that worked with local and regional businesses to strengthen the bond between organizational health and the health of its individuals. Her goal was to ensure we "understand the energy nature of all things, including personal and professional interaction." Later in life, Diane moved to be closer to family in Minnesota where she continued to study and share her lessons with others. She was a devoted follower of Paramahansa Yogananda and a member of Self Realization Fellowship. She taught regular classes and discussions on metaphysical topics to the members of her senior living community. To the end, she was engaged in the advancement of new ideas and discoveries of the body, mind and spirit. Refusing to heed the warnings of the doctors all those years ago, when they warned her to refrain from a vigorous work and family life, Diane pushed herself and encouraged others to transcend their safety and comfort zones. She enjoyed her time with family to the end, traveling and engaging with her children and grandchildren just three weeks before she succumbed to the totality of her lifelong health challenges. Multiple celebrations of Dr. Diane Kramer's life will be held later this summer and fall by family and friends including at Diane's beloved Lake Shrine in Los Angeles, CA, also in Evansville, Indiana and Eden Prairie, Minnesota. A memorial scholarship has been set up in her name at the Bellin College of Nursing. Heartfelt gratitude to the nursing and administrative teams from Riley Crossing Senior Living and Methodist Hospice for their exemplary care. For those who knew and loved Diane please consider a donation, in lieu of flowers, to https://www.icrc.org/en/donate/ukraine, in her name. As Diane was very passionate about peaceful coexistence on this planet, she was deeply concerned in her final days about the wellbeing and safety of Ukrainian citizens suffering in the wake of this unprecedented conflict. The International Red Cross was an organization she respected and supported.

The family of Diane Gladys Kramer created this Life Tributes page to make it easy to share your memories.

Send flowers to the Kramer family.