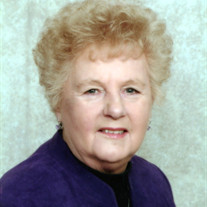 Delores "Dee" Erbele, Age 92, of Bloomington, MN passed away on December 19th. Delores was born on a farm in Burnstad, ND to Henry and Pauline Eissinger, the second of four children. The family moved to Wishek, ND where Delores graduated from Wishek High School at the age of 16. After graduating, she moved to Bismarck and worked in the North Dakota State Public Library. She met her husband Calvin Erbele in Bismarck and they married in 1952. They eventually settled in Bloomington, MN where they created a fun and loving home with their three children David, Jane and Paul. At the age of 30 Delores with encouragement from Calvin received her driver's license giving her the confidence to pursue a career outside the home. She decided to attend Robinson Beauty School in Minneapolis. Upon graduating, she began her lifelong career as a beautician which she enjoyed immensely. She continued working at La Court Beauty Shop in Bloomington until the age of 83. Calvin passed away unexpectedly in 1985 causing Dee to begin new chapters in her life. She continued her career as a beautician and began to participate in many new activities. She joined several bowling leagues and went on to participate in the Senior Olympics as a bowling competitor. She continued to play golf (a natural), played in several card groups, and volunteered at Hope Church in Richfield, MN. She enjoyed taking bus trips all over the United States as well as traveling abroad. She was also a "mall walker" long before it became popular and spent many hours carefully trimming the bushes in her yard (just as she would a head of hair!) During these active years she treasured all the wonderful friendships she made. After a severe stroke Dee accepted her limitations and sudden new way of life with grace and courage. The caring staff at her new home, Masonic Home of Bloomington, helped her to adapt and join in the many activities, including watercolor painting (her favorite). As always, she liked being with people, chatting and enjoying a good joke. The Masonic Home staff shared her life for many years and became like a second family to her. Dee always remained close to her brothers Leroy and Jim, her sister Stella and their spouses. She really enjoyed spending time with them and all their children and grandchildren. She also had a special place in her heart for Calvin's sweet North Dakota family, who were an important part of her life. Delores was preceded in death by her husband Calvin, son Paul and siblings Leroy and his wife Eldavere Eissinger, Stella and her husband Lyle Fox, and James Eissinger. She is survived by son David (Mary) Erbele and daughter Jane Erbele, as well as sister-in-law Mary Eissinger of Lubbock, TX, sister-in-law Delores and her husband Russell Feichtner of West Fargo, ND and sister-in-law Darlene Erbele of Lehr ND, and many beloved nieces, nephews and friends. Arrangements are being made by Washburn-McReavy of Bloomington. A memorial service will be held at the Masonic Home Chapel (11501 Masonic Home Drive, Bloomington, MN 55437)on Thursday, May 12th 2022 at 11:00 am. Visitation one hour prior. Interment will be at Fort Snelling National Cemetery.

Delores "Dee" Erbele, Age 92, of Bloomington, MN passed away on December 19th. Delores was born on a farm in Burnstad, ND to Henry and Pauline Eissinger, the second of four children. The family moved to Wishek, ND where Delores graduated from... View Obituary & Service Information

The family of Delores J. Erbele created this Life Tributes page to make it easy to share your memories.